How to pass your motorcycle test & get motorbike licence in UK

With enough practice, revision and preparation, passing your full UK moped/motorbike test should be fairly straightforward. Here we take you through the key points of the test – so you have the best chance of passing, first time round. 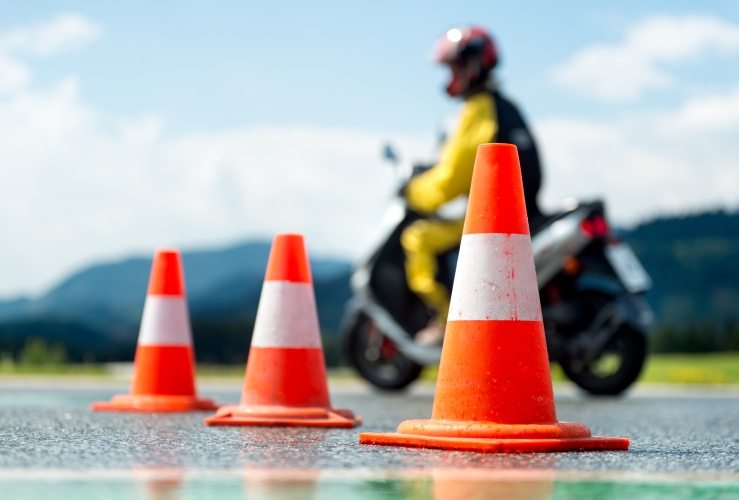 In the majority of cases, before you can take your practical motorbike test you must pass your theory test. This can only be taken if you have a provisional motorcycle licence.

If you fail the theory test on the first occasion, you can re-sit it as many times as it takes to pass. However, you cannot book the next test until three working days have elapsed.

The theory test contains two sections: multiple choice questions; and hazard perception – during which you will identify hazards on a video sequence.

What to take to your practical tests

Having passed your theory test, it's time to take modules 1 and 2 of your practical motorbike test.

You must take the following with you to both module tests:

Have a paper licence?

You must take along a valid passport together with your paper licence if you haven’t got a photocard licence.

Module 1 off-road test: what to expect

This is taken in an off-road location where you can manoeuvre safely.

The test will take around 20 minutes and will include:

Many riders fail because they do not keep to the minimum speeds.

Click here to learn how you can prepare to ride your motorcycle in different weather conditions.

At the end of the test you'll be told if you passed or failed.

You'll be made aware of:

If you pass, you'll be told of any faults you made and you'll be given your Module 1 pass certificate, which you must produce at your Module 2 test.

Module 2 on-the-road test: what to expect

This will take place on regular roads (not motorways) and will include normal stops, an angle start, and a hill start.

Directions from your examiner will be given by radio. In most cases you will be followed by the examiner, who will also be on a motorcycle.

You won't know the route the examiner will give you.

This will take around 10 minutes and will ascertain your ability to make independent decisions on the road.

If you go off the designated route you won’t be failed and if you forget the instructions you can ask for them again.

You'll be told if you have passed or failed after the test.

You'll be made aware of:
Module 2 pass requirements:

If you pass you'll be told of any faults you made and you'll be given your pass certificate.

You'll also be asked if you want your full licence sent to your address automatically. If so, you'll need to give the examiner your provisional licence.

Even though you don’t have your physical licence, having passed, you’ll be allowed to ride straight away – without L-plates.

You must wait 10 working days before rebooking your Module 2 test.

Tips on how to pass a motorcycle test:

Just beginning your life as a motorcyclist? We've put together some tips for ensuring your early weeks and months on two wheels are both fun and safe.

Download our pdf checklist: How to get your motorbike licence