The battery is a little-regarded component in the average motorcycle – until it dies and sees the owner stranded by the roadside.

Such eventualities are unpleasant – and usually avoidable.

However, there's no shame in suffering a dead battery – especially given today's motorcycles, burdened as they are by an array of extras which demand constant electricity. The trend of cruising around at lower speeds can also increase the chances of a dead battery, since it cannot properly recharge at such low velocities.

Add in a summertime heat-wave – or indeed a wintertime big freeze – and the result could be a battery that's deader than a twinkle in a do-do's eye.

While most of us understand that a battery has a positive and negative terminal and that our ‘cycle’s gadgets and gizmos require constant current, once we fit a new battery, we tend to forget about it.

In the old days, most bikes got their juice from a ‘flooded acid battery’. Today, two battery types dominate: the one mentioned and the ‘absorbed glass mat battery’ – or AGM. Requiring little or no maintenance, the AGM is understandably a popular choice, especially if a rider is less inclined towards a little DIY maintenance.

Batteries are composed of cells, which are in turn made of lead plates – alternatively charged positive and negative. A 12-volt battery would feature six cells, connected to each other and immersed in a solution of sulphuric acid and distilled water – called the electrolyte.

Electricity is generated when the cells and the electrolyte react to each other.

Flooded acid batteries and AGM batteries both fall under the ‘lead-acid’ cell type, although the AGM uses a different electrolyte, which is contained in a glass mat and doesn't slosh about as it would in a conventional battery. 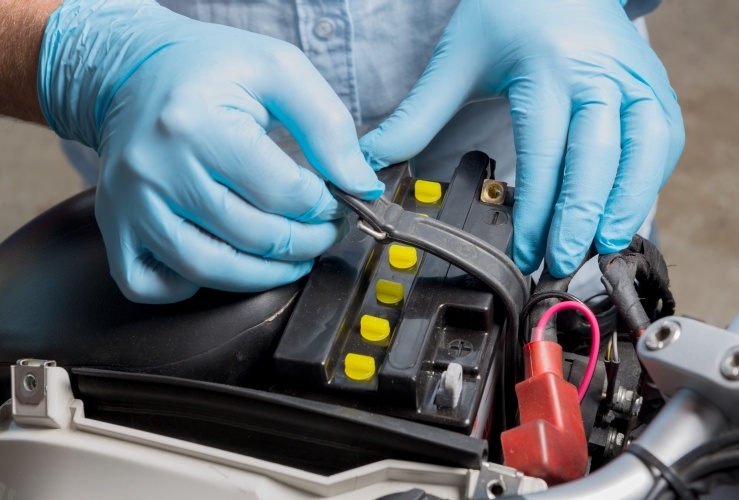 What can kill your battery?

Heat: High temperatures can reduce your battery's longevity and will increase the speed of discharge.

Vibration: Make sure your battery is secure and doesn't rattle around.

Sulfation: This can happen if the battery is constantly discharging or if electrolyte levels are too low.

Freezing: This shouldn’t be an issue if your battery is fully charged. But if it isn’t, the electrolyte could freeze and the casing could crack. Buy a new battery if it freezes.

Choose either a trickle charger (constant charge) or a taper charger (variable charge) to bring your battery back to good health. Be aware that this could take a whole day.

Or… the old school way to keep your battery charged

In fact, one of the most effective ways to keep your cells topped up is to ride your motorcycle regularly and at higher speeds (within legal limits).

Tips for good motorcycle battery maintenance:
Categories
Related Posts
startrescue.co.uk
£30.80
Green Flag (greenflag.com)
£40.32
RAC (rac.co.uk)
£154.00
The AA (theaa.com)
£99.50
Renew with us and save up to 80%
All competitor prices have been based on our most popular 3 star level of cover for a vehicle aged up to 5 years old. Cover includes nationwide recovery, home assistance, alternative transport, overnight accommodation and key assist. Last updated 21/04/2022.