Just 20 or so miles across the English channel, and easily reached by ferry or Eurostar, it comes as little surprise that, for us UK drivers, most trips to Europe by road involve some driving in France.

However, for some younger drivers this may not be a possibility. The legal limit for driving in France is 18 years old, so even if you hold a full UK licence, if you are 17, you will not be able to drive there.

For anyone else looking to drive in France the following rules and legal requirements for driving in France are important to be aware of.

But before you head off to drive in France, you’ll need to work out how you’re going to get there... 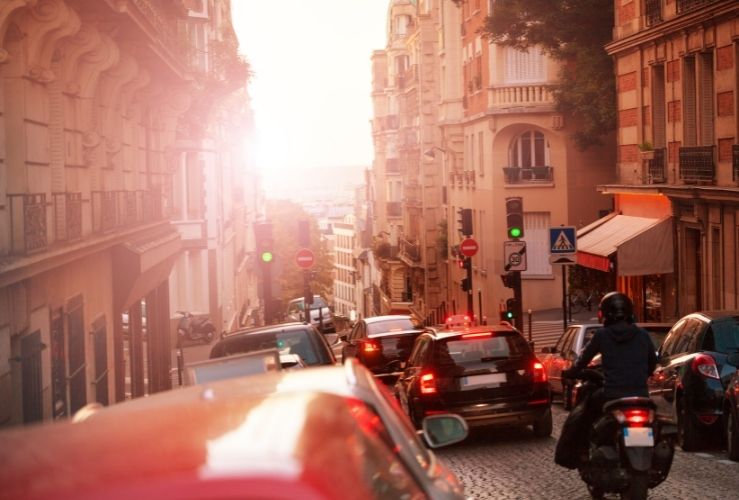 Driving to France from the UK: How to drive to France

If you’re looking to take your car to France on your next holiday or business trip, the first thing you need to decide on is the route that you’re going to take.

When driving to France from the UK, it’s possible to take a ferry, or alternatively, to travel via the Eurotunnel.

If taking the ferry, there are numerous ferry crossing options to consider.

Read our guide on crossing the channel with a car, to help you in deciding the best option for you when driving to France from the UK.

Driving in France in 2022 is different from just a couple of years ago.

Since January 2021, UK drivers have been subject to new rules when driving in Europe.

Driving in France after Brexit

You may be about to venture on your first trip to France since Brexit, and be wondering what the rules are for driving in France after Brexit?

Are there different rules in place? Can I still drive in France with a UK licence? What travel documents are required for driving in France?

Here we look at everything you need to know about driving abroad in France.

Documents for driving in France

Can I drive in France with a UK licence?

If you are visiting France for a short trip, you can drive in France with a UK licence.

Planning a longer stay in France?

Following Brexit, the UK and French Governments reached a mutual agreement on the recognition of driving licences.

On the other hand, holders of licences issued after 1 January 2021 who wish to live in France for more than one year must exchange their licence. In such cases, holders have a period of one year from when they settle in the country to apply for an exchange.

What other documents do I need to drive in France?

To drive in France you also require your Certificate of Motor Insurance and the log book (V5C) for your vehicle.

You are required to carry these documents, along with your driving licence at all times when driving in France.

Do I need a UK sticker to drive in France?

Yes, you require a UK sticker (Formerly GB Sticker) to drive in France.

When you are driving in France, a UK sticker needs to be clearly displayed on the back of your car.

Cars with number plates which include the UK identifier with the Union flag (also known as the Union Jack) on the left-hand side do not need stickers.

The UK sticker replaced the GB sticker in September 2021 so if you haven’t driven in Europe since this date, ensure that you have replaced your GB sticker with a UK sticker to enable you to legally drive in France.

What if my car has EU number plates?

What do I need to drive in France? - What you must (and must not) carry when driving in France

As with many other European countries, driving in France requirements stipulate that car drivers in France are required to carry a reflective jacket in their vehicle, for safety purposes in the event of a breakdown.

In France the requirement for the need to carry reflective jackets extends to those on two and three wheels as well as car drivers. So if you’re planning to head over the channel on your motorcycle, ensure that you have the relevant clothing packed.

Car drivers must also remember to carry a warning triangle in their vehicle in case of a breakdown.

In addition to reflective jackets and warning triangles, if you’re heading to France in wintry weather, particularly the more mountainous regions, you will need to ensure that you have snow chains.

You must fit snow chains when driving on snow-covered roads in accordance with local road signs. A maximum speed limit of 31 mph (50km/h) applies.

One thing you must not carry or use in your vehicle in France is a speed camera detector. Doing so could land you with a fine of up to €1,500 or even result in you having your vehicle taken away.

When driving your vehicle in France ensure your speed-trap cameras are turned off on your sat-nav! 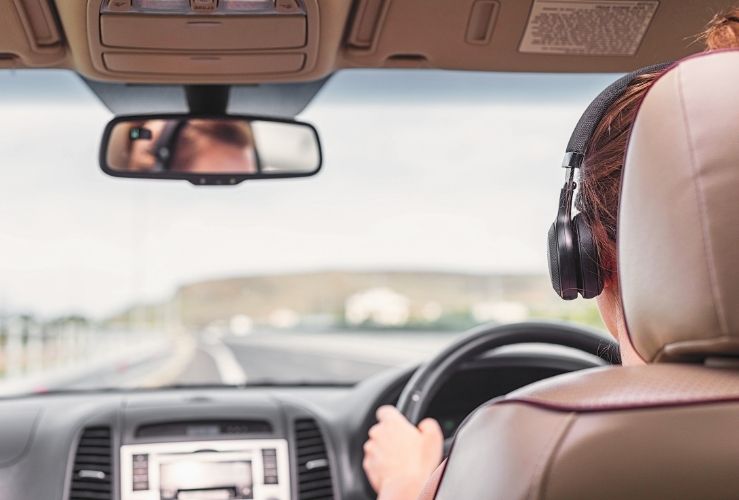 Using headphones and headsets (any device attached to your ear) behind the wheel is also illegal in France. –This covers devices used for phone calls as well as for listening to music.

The only exception to this rule is that you are allowed to use a Bluetooth or integrated systems in a motorcycle helmet.

What are the drink driving laws in France?

The drink driving laws in France are stricter than those in the UK; the limit is 0.5 mg/ml.

For new drivers less (than 3 years) the legal limit is just 0.02% so it’s probably better not to drink at all when driving.

Do I need a breathalyser to drive in France?

French law stipulates that all motorists driving in France – including tourists from the UK - carry an NF-approved (French Standard) breathalyser kit in their vehicle.

This law does look as though it is soon to be revoked; the French parliament approved a draft bill that would abolish it, but at present the rule remains in place in France's mobility laws.

Here are some further unusual driving rules you may encounter on a road trip to Europe.

In France, children less than 10 years of age cannot sit in the front of the car unless in a baby seat facing backwards (airbag  disabled) or unless there is a legitimate reason the back seat cannot be used, such as there being no back seats or they are already occupied by other children under the age of 10 years.

There is a €135 fine for not securing a child properly in your vehicle.

Children between 135cm to 150cm require a booster seat and children less than 135cm are required to be secured in a child’s safety seat.

Are dipped headlights required when driving in France?

When driving your car in France you must use dipped headlights in poor daytime visibility.

Motorcyclists are required to use dipped headlights during the day, irrespective of the weather conditions.

You will also need to adapt your headlights for driving on the right hand side of the road, as opposed to the left side in the UK.

Headlight Deflector kits can be purchased or your vehicle may have a manual or electric adjustment to alter the direction of the headlight beam. 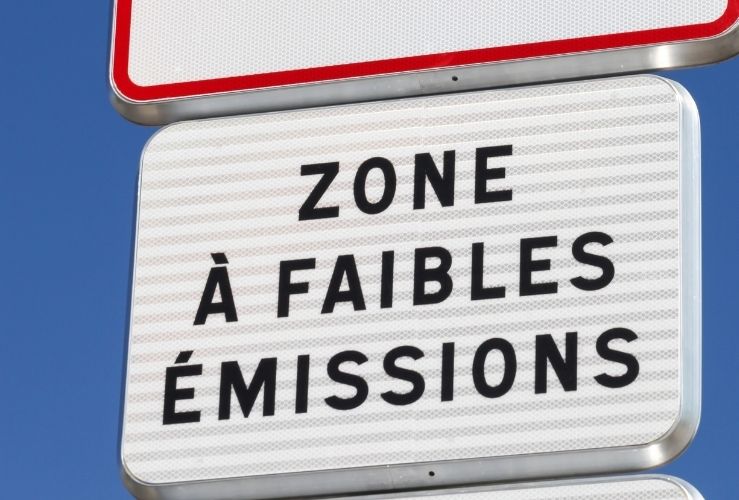 Low Emission Zones: Are there LEZ's in France?

French cities including Paris, Lyon, Lille, Marseille, Toulouse and Grenoble have low emission zones, which apply to all types of vehicles including cars and motorcycles.

When driving in a low emission zone in one of these cities drivers have to display the appropriate CRIT’Air sticker (Air Quality Certificate) in their windscreen or face a fine. This rule not only applies to French citizens but anybody, including UK drivers, driving within one of these designated areas.

If you’re going to be driving in France it is advisable to apply for the sticker so that you're covered, just in case you pass through one of these areas.

‘Cameras of the future’ the ‘Mesta Fusion’ will not only catch you if you are speeding, but they can, amongst other rule breaking driving activities, catch you using your phone, without your seatbelt on, illegally overtaking and tailgating.

France is home to the Arc De Triomph roundabout, probably the most famous roundabout in Europe, if not the world.

It is the norm for cars on this roundabout to give way to traffic entering onto the roundabout.

However, this is not the norm throughout the country. Indeed, on most roundabouts in France, the standard cédez le passage – give way – is in place. This means that you give way to traffic already on the roundabout  – the same way it works here in the UK. 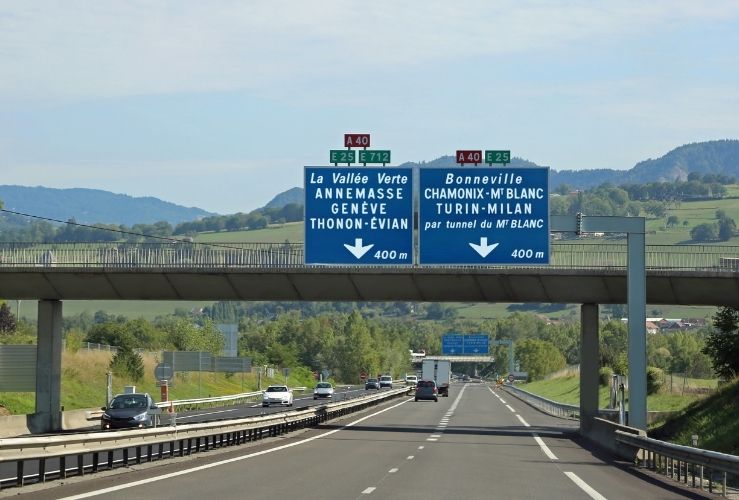 Advice for driving in France on French motorways

French motorways (Autoroutes) are privately owned. If you happen to break down on one, you’ll need to arrange with the routes recovery operators for a breakdown call-out and tow-in – For which there is a fee.

In the event of a breakdown use one of the orange emergency telephones positioned every 2 km along the motorway (or if you can’t find an orange phone, call the emergency services on 112)

The route operators will arrange for a breakdown call-out and tow you to a designated safe area, where you can call your breakdown provider for help.

For this service you will be required to pay a fee of at least €126 to get towed. – Or at least €190 if you breakdown at night, on a weekend or a public holiday – but don’t worry, if you’ve got European Breakdown Cover with Start Rescue you can get this fee reimbursed when back in the UK. (up to a maximum of £150.00).

For breakdown cover in France, get a quote online from Start Rescue.

These articles on some of the best European road trips may be the inspiration you were looking for: