Diesel exhaust fluid (DEF) is used in diesel vehicles to reduce nitrogen oxide (NOx) particles, which when released into the atmosphere can be harmful to human health.

AdBlue is a brand name registered by the German Association of the Automotive Industry, 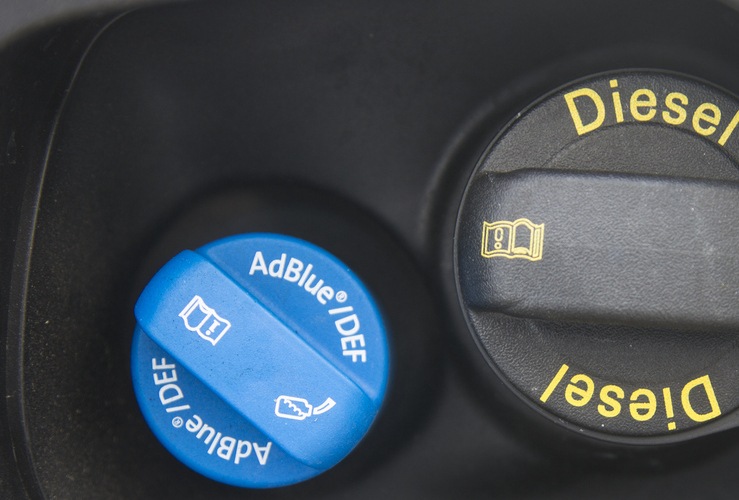 What is AdBlue / DEF made of?

How does AdBlue work?

The fluid enters a vehicle's exhaust system, where the aqueous urea is converted into ammonia and carbon dioxide. This ammonia (NH3) reduces the amount of NOx particles by converting them into harmless water (H20) and nitrogen (N2), which are themselves released into the atmosphere through the exhaust system.

Adding DEF to your vehicle

Diesel Exhaust Fluid - or AdBlue - must be added to a separate AdBlue tank.

The AdBlue cap is usually adjacent to the diesel cap, but is sometimes located under the bonnet.

Your vehicle's handbook will cover any fitted AdBlue technology, including how to add DEF safely.

Care must be taken not to contaminate the AdBlue tank.

Accidentally adding diesel fuel or engine oil to the AdBlue tank, for example, will seriously impact how well the SCR system works.

Equally, accidentally contaminating a diesel tank with AdBlue will cause serious problems. It is likely to result in a blocked filter which will mean no fuel enters the engine - and the vehicle will not proceed.

Only a small amount of AdBlue is used per journey, so top-ups are required only periodically. A full tank of AdBlue is likely to last for several thousand miles of driving.

Where can you get AdBlue from?

AdBlue diesel exhaust fluid can be added at most filling stations through a DEF pump nozzle, just like diesel or petrol.

Alternatively, a bottle of AdBlue can be purchased and added by the owner.

Once again, the car operator’s manual should be consulted thoroughly in relation to using AdBlue safely, including any minimum/maximum refill quantity.

Which vehicles use AdBlue technology?

In order to meet European emissions regulations (Euro 6), most new diesel vehicles must be fitted with AdBlue/DEF technology.

Alongside manufacturers of lorries, coaches, buses and agricultural vehicles, many diesel passenger cars are also fitted with SCR systems. Engines over 1.6-litres in capacity will in most cases feature AdBlue technology. Manufacturers include Volkswagen, Audi, Mercedes, Peugeot, Citroen and Jaguar.

The urea and de-ionised water comprising AdBlue are completely harmless to humans.

However AdBlue fluid can corrode bodywork if spilled, so care must be taken when transporting and filling.

Installing an AdBlue system in an older diesel car

It is uncommon for an older diesel car to be retrofitted with an AdBlue/DEF system, due to the cost, time and complexity of the project. Retro-fit systems do exist however, including the BlueFit from Amminex.

As with any type of car modification, the insurer should be informed that an AdBlue def system has been added. The premium may be impacted as a result of such a modification.

For the curious, the urea used in DEF is completely man-made, created by introducing heat to synthetic ammonia and carbon dioxide.