Is it safe to drive my car in a thunderstorm? 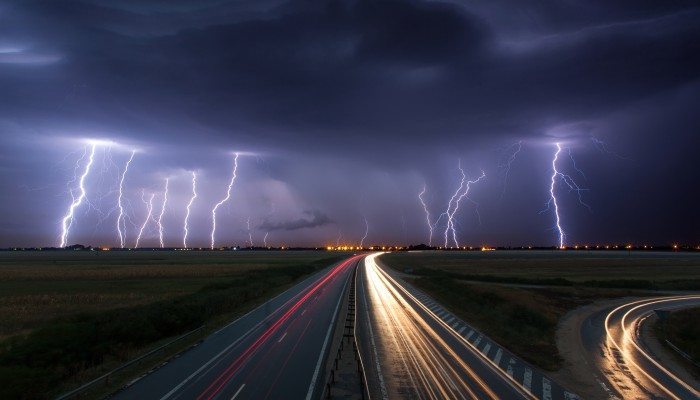 Being struck by lightning is not normally a big concern for us here in the UK, but with over 17,000 lightning strikes across the UK on Friday alone, fears of being hit by a thunderbolt may have increased somewhat.

But what about driving in a car during a thunderstorm? Does that pose any particular risks? We thought some of our annual breakdown cover customers might like to know.

It is a popular myth that because our cars rest on rubber tyres, we drivers are somehow safe from an electrical strike. But this is not the case. It is the car’s shell that matters.

In a fully enclosed, metal bodied vehicle, the trick is not to be in contact with any part of that body; in the unlikely event that lightning does strike it, the electricity will be conducted through the car's shell in a sort of Faraday manner - with the occupants being safe.

Soft tops, or cars with their windows open will naturally leave their occupants more at risk, since they are not fully enclosed by a conductive material.

Cars built of fibre glass or other non-conductive materials are of course less likely to be struck in the first place, but offer their occupants much less protection if they are.

The Electrical Safety Foundation International recommends that you do not leave your (fully enclosed metal) vehicle in a thunderstorm. It also advises against using electronic devices during a storm. For more advice from the ESFI, visit: http://esfi.org/index.cfm/page/Lightning:-Frequently-Asked-Safety-Questions/cdid/12543/pid/10272

It is best to avoid driving in a thunderstorm, but if you do need to venture out, you can take solace in the fact that lightning fatality rates are very low. According to TORRO, which researches storms and tornados, between 30-60 Britons are struck by lightning each year, with three deaths per year on average.

The organisation’s website does not mention anyone dying after their car was struck by lightning.