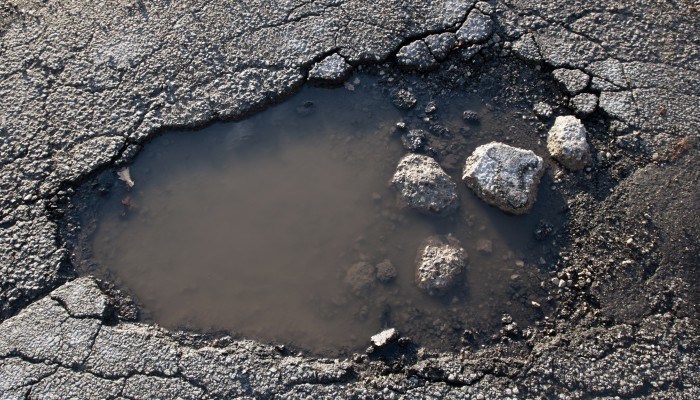 Were you on the Leatherhead section of the M25 on Friday? If so, you may well have seen the huge pothole that developed across three of its lanes just before the weekend began.

If you somehow missed the hole, then you may have experienced the ten-mile tailback that resulted from having just one lane open while repairs were underway.

The pothole was reported early on Friday prompting specialist repair crews to arrive at the scene quickly. However, the hole took several hours to remedy.

For a short time the M25 was truly living up to its nickname – 'the largest car park in Europe'.

But as many of our breakdown cover customers know, with the wetter weather comes a more regular occurrence of potholes.

Potholes appear when the soil structure underneath a section of tarmac is affected by the presence of water. Traffic passing over this weakened mass of earth causes cracks in the tarmac, eventually resulting in a hole.

Local authorities work hard to prevent and fix potholes, but the cost of doing so is high. However, most would agree it is worth the effort. Potholes cause damage to cars and can cause accidents. In 2012 councils in England and Wales had to pay out £22.8m in compensation for pothole damage.

As the nights get darker it becomes harder to spot potholes in the road. But being vigilant for them could save you a lot of money. Potholes can damage wheels, axles, tyres and suspension systems.