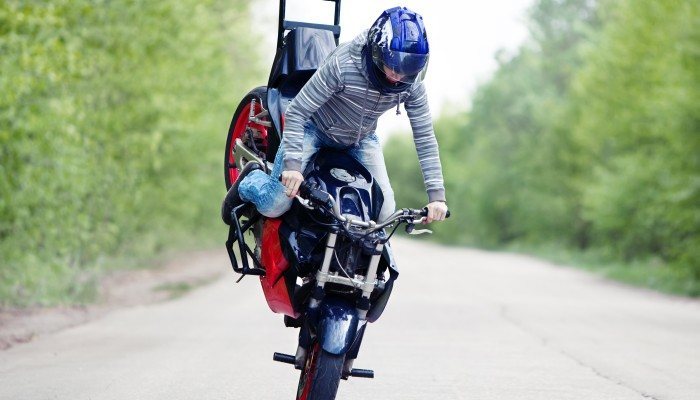 Here at startrescue.co.uk we see our fair share of stricken motorbikes – and stranded motorcyclists – but nothing quite like this video from eBaum's World.

You may, having watched the video, struggle to remember the part of your CBT that involved standing in your motorbike while it was motion.

Indeed, if any of our motorbike breakdown cover customers needed a stark warning against the dangers of riding a motorbike whilst standing on its saddle, then this is probably it.

Not only did the chap in question have to effect an emergency dismount (or fall off) but he was forced to witness his out-of-control steed strike a lamppost just seconds later. As in so many similar cases, the lamppost came off better.

Needless to say, even our experienced Recovery Agents would have a hard time getting that particular Kawasaki back on the road.

Fortunately, such exploits are a rarity – and while this clip may draw the odd smile, we're just glad the person in question was wearing a helmet.

The penalties for being caught on a public highway carrying out such exploits could be heavy, since such behaviour endangers other road users as well as the motorcyclist in question.

On a more serious note, motorcyclists are 38 times more likely to be suffer a fatal crash than those who travel in cars. However, motorcycle deaths have dropped from 493 in 2008 to 331 in 2013, according to the UK government’s Think website.