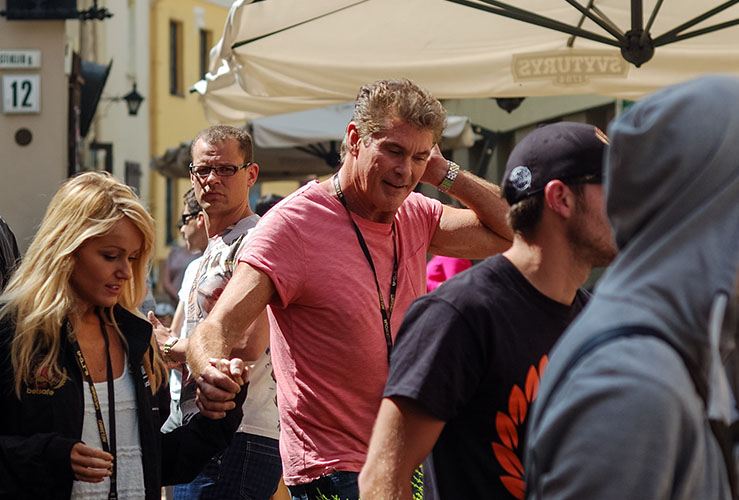 David Hasselhoff has waved off this year's Gumball 3000 Rally, which started out in Mykonos, Greece and is now well underway.

The cars began the race based on how much money they raised for the Gumball Rally Foundation. More than £300,000 has been raised for the charity so far this year.

The first car to set off was a metallic-red Pagani Huayra Roadster, which raised £85,000. Second on the grid was a green Ferrari 458, followed by two souped-up Mercedes.

There was a party atmosphere on the glitzy Greek island, as thousands turned out to watch the supercars set off. Several days of events took place on Mykonos before the supercars began their epic journey across southern Europe.

This year the rally will end on another party island - Ibiza, Spain. The rally will have passed through eight countries in total.

The Gumball Rally started in 1999 and covers a different 3,000 mile route each year. Such are the crowds for Gumball Rallies, famous landmarks of host cities are often shut down as wild parties ensue.

The selection of David Hasselhoff to begin proceedings was no accident; the former Baywatch and Knightrider star is hugely popular in Greece.

Where else will the Gumball Rally visit this year?

After Mykonos and a ferry trip, the rally will arrive in the Greek capital, Athens, then move on to Thessaloniki, Tirana, Porto Montenegro, Venice, Monaco and Barcelona - before arriving in Ibiza.

The Gumball Rally 3000 Foundation supports a number of charitable organizations, including Child Bereavement UK, the Laureus Sport for Good Foundation and Project Wreckless, which aims to help young people who are at risk from dropping out of school or engaging in criminal activity.