The most expensive cars in the world 2021

Every few months, another limited edition super car seems to appear - often with a price tag that trumps previous offerings.

Perhaps more surprising than the sheer output of the world’s supercar makers, is the fact that these exclusive models are snapped up so quickly - sometimes before they are even built.

Top 10 most expensive cars in the world, at a glance -

What is the most expensive car in the world?

The most costliest car in the world is the Bugatti La Voiture Noire, with an eye-watering price tag just shy of $19million!

Where did the inspiration for the design of the most expensive car in the world come from?

According to Bugatti, their vintage Type 57 SC Atlantic reflects the marque's "pioneering spirit, passion for perfection and the desire to continually redefine its limits". As such, Bugatti drew inspiration from the old Type 57 when creating La Voiture Noire - or "the Black Car" (we reckon it sounds better in French).

One of the four Atlantics ever built has been missing since World War Two - and La Voiture Noire is an homage to that car.

How many Bugatti La Voiture Noire have been manufactured?

Only one Bugatti La Voiture Noire will ever exist, and more than two years after it was sold, it still hasn’t left the production line!

How fast can the Bugatti La Voiture Noire go?

La Voiture Noire packs a 1,500 horsepower engine that pushes it to speeds of up to 261mph.

“We produced a true one-off, a single unit car that we call automotive haute couture,” said Achim Anscheidt, Bugatti’s design director. “It’s not just a car anymore, it’s really more like a piece of art in line with the highly exclusive fashion and luxury brands in France.”

The car, which is being built at Bugatti's ancestral home in Molsheim, France, features an 8-litre, 16-cylinder engine develops 1,103 kW/1,500 PS and 1,600 Newton-metres of torque. It also boasts no fewer than six tailpipes, adding to the glamorous over-the-top nature of this most unique of vehicles. 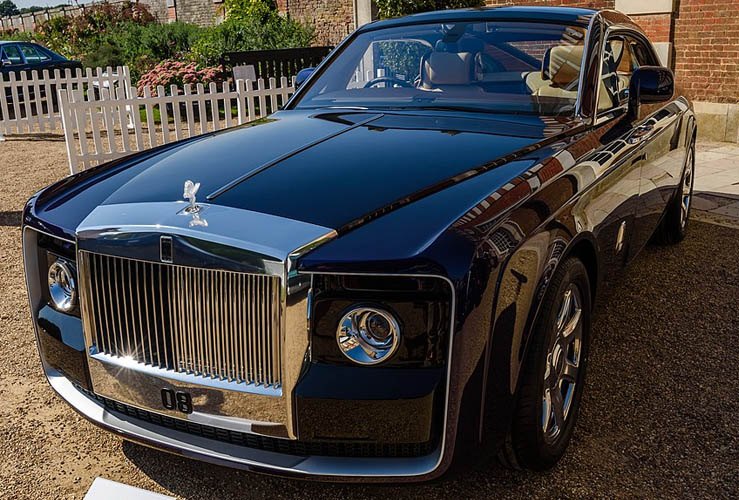 The Rolls-Royce Sweptail is another one-off car, and one that also draws inspiration from the finer things in life. Giles Taylor, director of design at Rolls-Royce Motor Cars, described the Sweptail as "the automotive equivalent of Haute couture" - talking in much the same terms as Bugatti.

The Sweptail was also inspired by the coach building of the 1920s and 1930s, and was commissioned at the request of an aircraft and superyacht specialist who had a special idea. However, the base design for the car was the Rolls-Royce Phantom Coupé.

Costing $12.8 million (£10.2m) in 2017, the Sweptail took four years to build and at the time it was finished it was the most expensive car of all time. Just two years later it was supplanted by Bugatti's La Voiture Noire, listed above. However, it is still regarded as the most unique and expensive Rolls Royce ever built. 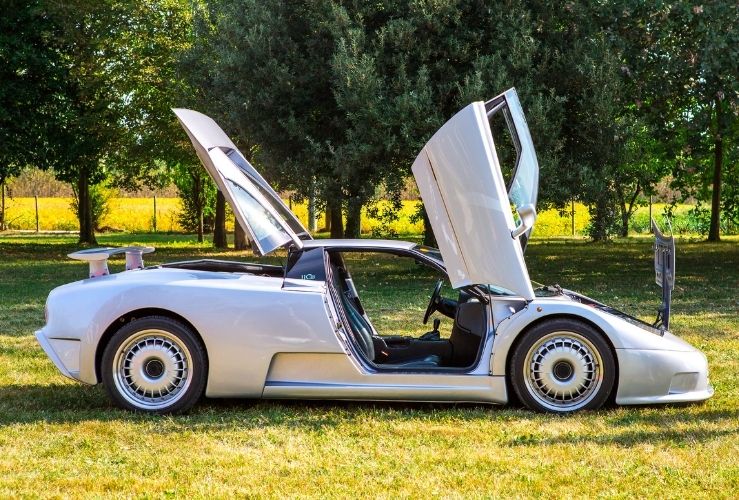 Another Bugatti features net in our list of the top 10 most expensive cars in the world.

We know what you're thinking: "Bugatti doesn’t really have an entry-level model, does it?"

But among the super-rich, the Centodieci ("110" in Italian), might represent something of a bargain, relatively speaking.

How fast can the Bugatti Centodieci accelerate?

The Centodieci successfully reflects the blistering acceleration of the old EB110, only more so - as you might expect. It can manage 0-124 mph in just 6.1 seconds - 0.4 seconds faster than the Chiron, on which it is based.

Everything about this aggressive-looking vehicle screams “look at me”, including the five rounded air-intakes shaped like a diamond; 8 taillights, quad exhausts; and a very limited production run. Just 10 will be produced, with deliveries from the Molsheim factory due to take place in 2021. 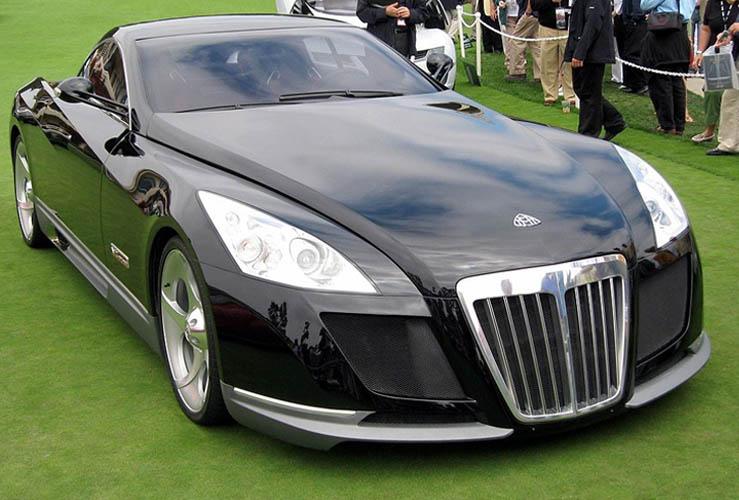 This one-off Batman-esque sports car was built by Italian car firm Stola, in collaboration with  DaimlerChrysler. It was made to show off the Carat Exelero tyre range from Goodyear, whose subsidiary Fulda commissioned it.

And while all these big names sound impressively complicated, the final design was completed by four students from Pforzheim University of Applied Sciences in the Black Forest, Germany. The only stipulation was that the car must reach 217 mph in order to test out the tyres fully.

Despite being unveiled at the Tempodrom in Berlin in 2005, the Exelero remains one of the world’s most costly cars.

What are Maybach famed for?

Maybach is now a part of the Mercedes-Benz division of Daimler AG, but the marque has had an illustrious history. Maybach manufactured almost all the engine used in German tanks during World War Two, including the Panzer I, II, III, IV and V, the Tiger I and II.

When the sunlight hits the carbon fibre of the Koenigsegg CCXR Trevita, it sparkles as if millions of diamonds are in the body; Trevita means "three whites" in Swedish. Before the CCXR, carmakers only had access to black carbon fibre weave, but Koenigsegg developed a new process to make the material white.

How many Koenigsegg CCXR Trevita’s are there in the world?

Because the process of manufacturing the white body shell was so laborious, Koenigsegg decided they would only make two.

One supposes they could have built it using black carbon fibre then covered it in sparkling white paint - but then they wouldn’t be able to charge millions of dollars for it!

Who owns the Koenigsegg CCXR Trevita’s?

Purportedly a Trevita was bought by Floyd Mayweather for $4.8m. It's V8 engine boasts 1,018hp and it can reach at least 254 mph. It’s not clear who purchased the second model.

Based on the Lamborghini Aventador, the Veneno was built to celebrate the 50th anniversary of Lamborghini. It features the Aventador's 6.5-litre V12, producing 740 hp and is a road-going version of Lambo’s racing prototype.

How fast can the Lamborghini Veneno go?

What does Veneno mean?

The name "Veneno" comes from a famous fighting bull; most Lamborghinis are named after deceased bovine warriors, and all of them, including Veneno, had sent a matador to the next life.

How many Venenos were made?

Only three Venenos were ever built, and all were purchased before they were even seen by the buyers.

The Veneno is a little too much like a spaceship or a Transformers toy for some, but while it may look like something you’d see repeated across a child’s bedroom wallpaper, it is nothing if not eye-catching, a quality that many of the world’s super-rich appreciate.

Our second Lamborghini in our compilation of the most expensive, a  little less "crazy bull" than the Veneno, the Sian isn’t even named after a killer bovine.

What does Sian mean?

Sian in fact comes from the Bolognese word for 'flash' or 'lighting', a name that was first used on a Lambo in 1963.

How many Lamborghini Sian’s will be made?

The Sián (FKP 37 to use its full title) was Lamborghini's first-ever hybrid vehicle and is all-wheel-drive.

It’s overall design might be considered a little more “subtle” than the Veneno, but it’s undeniably eye-catching, comprising as it does the wedge shape developed by famed automobile designer Marcello Gandini.

The leather upholstery was completed by Italian firm Poltrona Frau, and the Sián is the first Lambo to feature 3D printed parts. 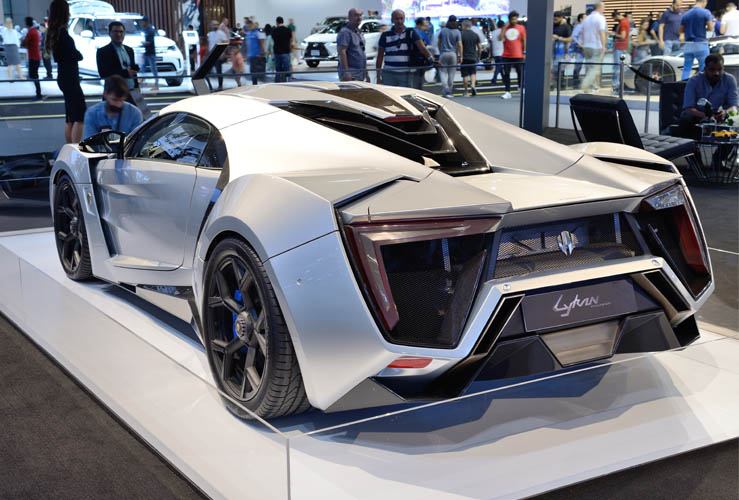 The Lykan Hypersport is the Middle East's one and only supercar.

How fast can the Lykan Hypersport go?

The answer, say the makers, is "luxury": think gold seat stitching and diamonds in the headlights.

If these 440 diamonds (15cts) aren’t to taste, the buyer can choose from rubies, diamonds, yellow diamonds, and sapphires - depending on the chosen body colour.

How many Lykan Hypersport’s were built?

Perhaps understandably, only seven units were ever built by the United Arab Emirates firm, although one of these was snapped up by the Dubai Police Force.

The company was formed with the assistance of Lebanese and Italian engineers.

Mansory took a Grand Sport Vitesse Roadster and among lots of other things, fitted an accumulation spoiler package, new LED lights and an upgraded cabin. They also fitted alloy wheels with five double-spokes.

The base Veyron features an 8-litre quad turbo-charged W16 engine, producing no less than 987hp.

If the Vivere edition isn’t to your taste, perhaps the newer Vincero edition will be more suitable - which Mansory calls “a limited customization programme for the Bugatti Veyron 16.4”.

What other brands of cars has Mansory modified?

Sergio was instrumental in ensuring Ferrari survived and thrived after his father’s death.

The sweeping curves of the Pinafarina are so unorthodox, for a second it looks as if the front is actually the rear!

Unveiled at the 2013 Geneva Motor Show, the Pininfarina is a coach-built barchetta (“small boat” in English) and based on the 458 Spider.

How many Ferrari Pininfarina were made?

Just six versions of it were ever made, each one sold to a hand-picked customer - presumably a big Ferrari fan with deep pockets.

While the external styling of the vehicle is dramatically different from the donor model, the under-the-bonnet credentials are exactly the same.