What will driverless cars be able to do?

They can sound like something out of a science fiction film, but driverless cars are inching ever closer to reality. Last year, transport minister Claire Perry acknowledged that many people still thought of the prospect in terms of “zombie robot taxis”, rather than an exciting technological advance that can take the stress out of the school run.

They are also being touted as a lifeline for elderly and disabled people, as well as the answer to road safety problems. However, not everyone is convinced that autonomous vehicles are desirable, or even possible.

So, just what can we expect from the first generation of driverless vehicles?

The government has backed Ms Perry’s words with actions when it comes to realising the dreams of driverless car developers. As part of chancellor George Osborne’s Budget in March 2015, the Treasury committed £100 million to research into the technology - an amount that was matched by the automobile industry.

This was followed by a further £20 million pledged during July to match contributions from bidders on government contracts, showing that the rollout of driverless cars in the near future remains important to ministers.

Announcing the funding in March, then-business secretary Vince Cable said: “Britain has a long history of transport innovation, from shipbuilding to the railways that underpinned the industrial revolution, and is now home to a diverse and dynamic automotive sector.”

He added that the additional money for autonomous vehicles would help to build on this illustrious heritage and make sure the UK was “well placed to profit from the growing market for high-tech vehicles of the future”.

One of the most high-profile names in the world of driverless car research is search engine company Google. Its recent decision to separate its core business from more unusual ventures, including medical research and drones, along with its driverless cars, under the holding company Alphabet does not seem to be a sign that it is scaling down or abandoning its ambitions in this area.

But the key question is: when can we expect to see driverless cars on our streets? While this depends on who you ask, there are a number of exciting tests going on around the world.

In the UK, the Department for Transport (DfT) recently published a set of guidelines to ensure that the new cars can be tested in safety. This is particularly relevant as there are already a number of trials ongoing across the country. At the University of Michigan, researchers have even built an entire artificial town for the sole purpose of testing their prototypes of autonomous vehicles.
Developers have been reluctant to put a date on commercial release, on account of the stringent safety standards that must be met before rollout is possible. Depending on the degree of driver control required, we could see the vehicles on our roads within a decade or so, or even just a few years.

For example, autonomous vehicles that are permitted to run on a few designated routes, with destinations pre-programmed, could become a commercial possibility relatively quickly, as this has already been achieved with trains.

The Docklands Light Railway has been successfully running driverless services in East London since 1987. However, all the trains have a Passenger Service Agent (PSA) who opens doors, checks tickets and patrols the carriages. PSAs are able to take control of the train in the event of mechanical failures or other major problems. This reflects the importance of a human override to existing systems and makes it even more likely that it will be required in other autonomous vehicles. 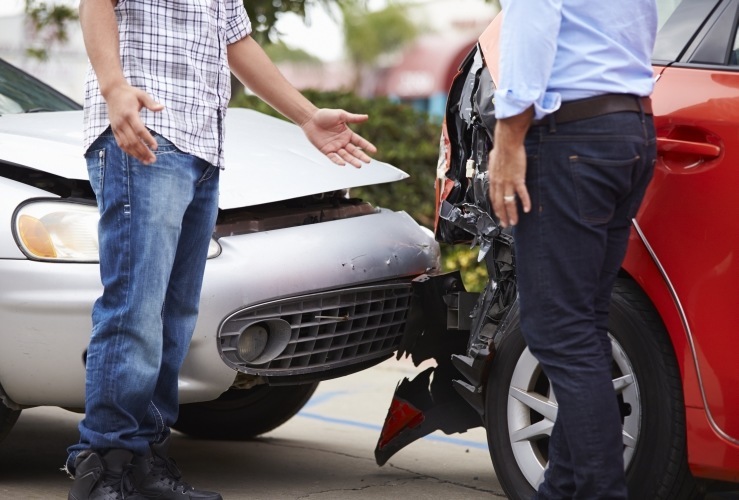 One of the biggest advantages of driverless cars is their potential to eliminate driver error: a major cause of road accidents around the world.

In fact, some figures suggest that 90 per cent of all car accidents are caused by human factors, such as tiredness, inexperience, excessive speed and drink driving.

However, there have already been a number of accidents involving autonomous vehicles, mainly in California, where Google is testing its models. Of 14 accidents over the last six years, there has only been one injury - a Google employee who visited hospital with mild whiplash, following a crash in July 2015.

As on previous occasions, the company attributed the accident to human factors in the car that drove into the rear of its autonomous vehicle, rather than a problem with the new technology. The vehicles on this testing programme have already driven over two million miles along Californian roads.

For tests in the UK, a human backup driver who is appropriately qualified must be able to take back control in the event of technical problems. This is likely to remain a safety feature when the cars are adopted by the general public, at least while drivers learn to trust the new technology.

In terms of the vehicles themselves, some are even predicting that total use of autonomous vehicles could mean the end of the motor industry as we know it, due to drastically reduced numbers of accidents.

There have also been suggestions that the computers of driverless cars could even be vulnerable to hacking attacks. A group of researchers from Virginia have already been commissioned by the Department of Defense to attack the prototypes in ways that might be used by hackers in May 2015.

They found that it was relatively easy to take over a vehicle’s acceleration and braking controls (a finding they were able to replicate with remote-controlled drones). This highlights one of the major stumbling blocks that autonomous vehicles will face.

Teams on various developments are now working on solutions to this flaw, but it is likely to be a major factor in determining when the technology hits the market. This aspect of safety is increasingly important given growing concern about terrorist groups such as IS and their technological abilities, or online groups that can come into conflict with authorities like Anonymous.

While there is a lot of talk about the release of driverless cars, there are some issues that will make their transition to the consumer market more challenging.

One of these is that the lasers and cameras that are necessary for full automation can be severely impaired by fog, snow and rain, making them unsuitable for some climates. Work is underway to develop more powerful sensors, but it is unclear how long this will take.

In addition to this, as there are so many development projects on the table, another major concern is how cars made by different manufacturers will be able to communicate with each other. This is because a substantial number of companies will have to agree on a standardised system that can effectively prevent collisions between autonomous vehicles.

One possibility in this area is government intervention to create a protocol that can be used by everyone, but this does not cover the possibility of cars being taken abroad and the difficulties that this could cause.

Of course, it must also be remembered that a lot of people actually enjoy the act of driving. Just as the invention of the car has yet to stop people riding horses or catching trains, the advent of autonomous vehicles is unlikely to stop people wanting full control of their vehicles, at least in some circumstances.

This means that the human factor involved in accidents will always be present, limiting the potential for collision reduction.

While we generally don’t realise it, many of us are already making use of the fruits of the research into driverless cars.

In terms of the eventual adoption of fully autonomous cars, this gradual introduction of some of the associated technologies may be beneficial. It means that people are able to get used to components of the innovative concept at their own pace, and that they are less likely to be suspicious or frightened of its full potential.

In short, while driverless cars are an exciting possibility, the reality may be a lot closer to technology we already use everyday than to the fantasy worlds we see in books and films. However, the potential for serious advances, along with the benefits it could bring to vulnerable people, mean that developments in autonomous vehicles are worth watching with interest, although it is still unclear what form they will take when they are ready for the market.