Potholes: How to avoid damaging your car

Potholes are unsightly and hazardous, with as many as one in ten mechanical failures in UK cars being caused by these craters every year, costing motorists as much as £730 million annually.

They are created when moisture seeps into a crack in the road, which then expands upon freezing, causing the hole to appear. Many can start out small and gradually increase over time as cars drive over them, damaging the structure of the road beneath its surface layer. The weather can make potholes grow, as a repeated cycle of freezing and thawing leads to further corrosion.

The rise in the number of potholes on UK roads is not just down to bad weather, as local councils appear to have adopted a 'patch and dash' approach to save money. This means that instead of resurfacing the road, the craters are filled individually, leading to the repairs not lasting long in most cases, seeing the problem quickly returning.

Unfortunately, until cash-strapped councils begin investing in plans that will keep roads pothole-free in the long term, they will continue to be a nuisance to motorists.

Here are a few tips on how to avoid damaging your car tyres and body while driving on crater-filled roads. 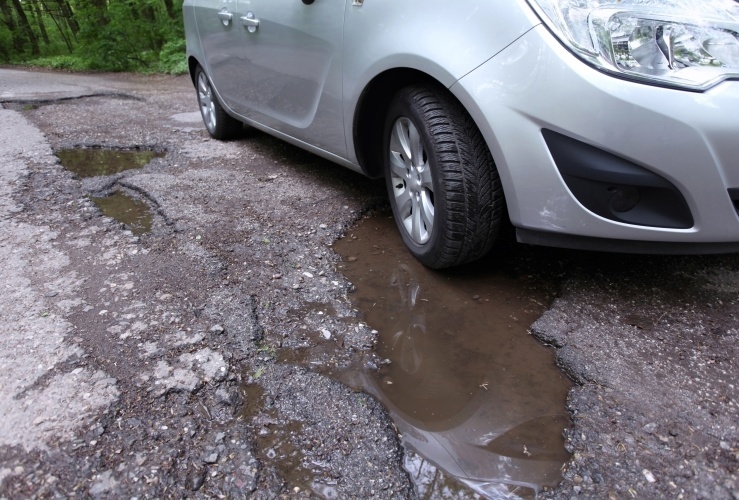 One of the easiest and most simple ways to protect you and your motor against potholes is to keep your eyes peeled when driving and watch your speed. This is particularly important when it's pouring down with rain, as deep cavities can be hidden under the cover of puddles.

It's important that you keep plenty of space between you and the car in front so a pothole doesn't suddenly appear and take you by surprise. Maintaining distance between the driver ahead of you will mean you're more likely to see potholes in advance and can take evasive action if necessary.

Before taking action to avoid a crater, you need to make sure you're checking around for pedestrians, cyclists, motorcyclists and other cars, as you don't want to cause an accident when you move to avoid a cavity.

Hitting a pothole when driving at fast speeds will mean more damage will be caused to your car. If you see one ahead, take your foot of the gas and slow down.

Avoiding unnecessary braking will also help you avoid putting a dent in your motor. If possible, refrain from applying your brakes as you go over the pothole, as this will tilt the car forward, placing more pressure on the front suspension.

If you can't avoid driving over a pothole, do so with care. You should allow the wheel to roll freely into the hole and pass over it.

You must ensure you are holding the steering wheel properly - at 'ten' and two' - when travelling down a road that is littered with craters. Failure to maintain this position can lead you to lose control of the vehicle, which could cause more damage to your car or even an accident involving someone else.

8. If your car is damaged

If the worst happens and the pothole knocks something off your vehicle, such as a hub cap, stop at the nearest safe place before you get out and attempt to retrieve the detached part. Otherwise, you may be putting yourself at unnecessary risk.

9. If you need to Inspect the damage

The same applies if you want to get out and have a look at the damage the crater could have done.

You should also seek a professional opinion from a garage or mechanic if you suspect that your car has been scuffed, scratched or worse because of a pothole. Ask them to verify if there could be any issues other than what you can see on the body, such as tracking and wheel alignment or the suspension.