How to choose a van? Top tips for choosing a van

Sorting the long-wheelbase from the Luton

Consumers can be forgiven for feeling a little confused when it comes to van options.

There are so many shapes and sizes, before you’ve even considered what might be powering it.

Here we take a look at the important factors to consider when choosing a van.

Why choose a van?

Vans are the life-blood of businesses, carting goods and materials across the country. There are sound commercial reasons for choosing a van, not least the tax benefits.

Asides from commercial use, vans can also be a popular choice for drivers who wish to have the capacity to transport larger items, or numerous items that otherwise wouldn’t fit into a standard car.

The good news is that modern vans are well-equipped, quiet and efficient. Gone are the days when they were a poor relation to passenger cars.

Safety and security aren’t neglected, and it’s possible to specify a decent level of equipment to keep drivers happy.

From a pocket-sized Fiesta van to a big Luton-backed Transit, the term ‘van’ covers a lot of bases.

The would-be van driver needs to know if their products or belongings are going to fit in a van. In a lot of cases, that’s hard to quantify – delivery vehicles will be asked to take on all sorts of assignments.

But for many, it’s a case of being able to fit a known quantity of tools and materials into the loadspace.

A lot of vans give the option to choose between standard and extended lengths, for long or awkward loads.
Likewise, the roof choices generally span between standard, ‘H2’ (medium) and ‘H3’ (high roof).

Bear in mind the taller of these will struggle to get below height restrictors on car parks and the like. 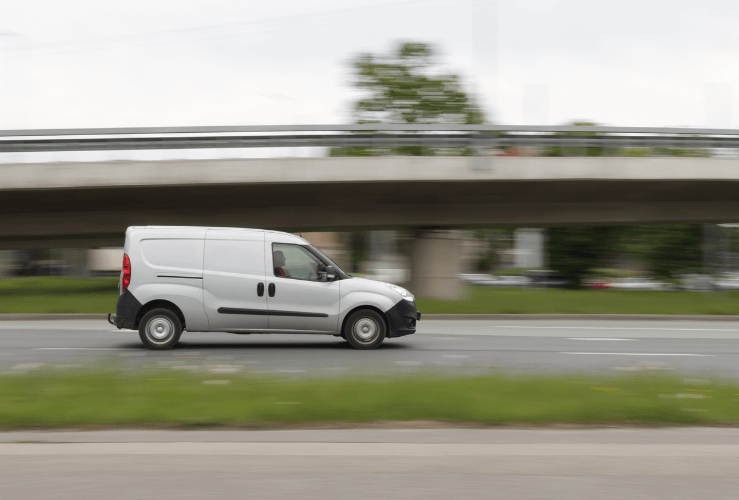 Vans generally fall into one of three categories:

Alternative configurations for larger vans are ‘dropside’ (a large pickup with folding sides), or a ‘tipper’ where the load bed is hydraulically lifted.

A ‘chassis cab’ leaves the back end of the van empty for a custom structure, such as a camper van installation.

‘Luton’ bodied vans have a cube-shaped load area, often with an electric tail lift to help with loading and unloading.

Having settled on a size for your van, be prepared to do some homework about payload.

Van payload: Will the payload of the van be sufficient?

Vans that are carrying heavy tools and equipment need to be specified correctly. Get this wrong, and you could be subject to a fixed penalty notice with a fine of up to £300 – or a court summons in extreme cases.

Think about the ability to accept a standard pallet (1200x800mm) if your load is to be fork-lifted into and out of the van.

Often the heavier-duty vans will have a ‘twin-wheel’ setup at the rear to cope with the additional payload.

Combined with heavier duty brakes and a suitable engine, these vans can be extremely capable – but also expensive.

Smaller vans are often ‘car-derived’, which means they use many components fitted to passenger cars which keeps running costs low.

These more compact vans are easier to park but of course can’t cope with bigger loads.

However, long-but-light loads (such as a ladder) can be carried on a roof-rack, leaving the load bay clear for tools and equipment.

Parking considerations: Is there suitable parking available for the van?

In most cases, a bigger van is best if you can afford it.

Parking a big van at company premises is usually not a problem. But for those who keep their van at home on a smaller drive, or looking for parking spaces in town, a smaller van will fit the bill.

Doors: How many doors do you need on the van?

As well as a variety of shapes available for vans, there are options for the doors.

Often, standard fit for van doors comprises of two rear doors that open to 90 degrees and a nearside sliding door for unloading next to a kerb.

Many manufacturers also offer van models with rear doors that open to 270 degrees (i.e. flat with the sides of the van), or an additional sliding door on the driver’s side.

Electric vans are big news at the moment. Not surprisingly, many companies and consumers are looking to benefit from much cheaper fuel costs provided by EVs.

Despite the increased interest in upgrading to electric vans, there are still limitations that may not be palatable for businesses – not least their limited range.

Vauxhall’s Movano-e needs a charge as soon as 72 miles with a smaller battery. Ford’s newest Transit EV is claiming a range of 196 miles, fine for city driving but less capable of sustained motorway driving, particularly with heavy loads on board.

Nevertheless, the prevalence of Clean Air Zones (CAZ) in UK cities like Birmingham, Bristol and Portsmouth may force some van drivers into EVs.

Newer entrants into the EV van market include Arrival Van and LEVC VN5, both assembled in the UK.

Diesel is still king of van power, but fuel costs are significant - as most drivers are painfully aware right now.

Who’s driving? Ask yourself this, because driver comfort in a van depends on many factors including whether a load bulkhead is fitted behind the front seats. If it is, the driver’s seat can’t recline back as far as many would like.

Just because the van is listed as a three-seater, doesn’t mean you’ll be comfortable on a long trip – the middle front seat is often just a temporary perch.

If you’re regularly taking three or more crew to jobs, the ‘crew-cab’ or double cab gives you an additional row of (proper) seats – but obviously they eat into the load space.

Speed limiters prevent vans exceeding 70mph. They can be an option on new vans, or retrofitted to used vans.

While they can’t prevent other forms of driving offenses, fleet operators can at least stem the flow of speeding tickets.

Likewise, it’s possible to specify new vans such as the Ford Transit with a rev limiter and ‘acceleration control.’

Vans used on muddy building sites might benefit from mud-and-snow (M&S) tyres, which give better traction in slippy conditions.

An uprated front axle can help with traction and prevent the underside of the van grounding-out on rough terrain.

For more go-anywhere ability, four-wheel drive is essential. Many of the truck-based commercial vehicles (Nissan Navara, Mitsubishi L200) offer this, and there’s even Land Rover Defender and Discovery commercial variants for ultimate in commercial off-road ability.

Vans are getting increasingly sophisticated in their equipment provisions, but that doesn’t mean that car-like niceties are standard-fit.

Do vans have air conditioning?

Connectivity is improving – it’s likely that a new van will come with Bluetooth connectivity for making and receiving calls. However, sat nav isn’t generally fitted to base model vans, and autonomous aids like lane-keep assist and adaptive cruise are usually option fit.

Buying a van: Should I buy or lease a van?

If a sign written or modified van is important for your work, that pretty much forces you down the purchasing route – buy the vehicle, then it’s yours to modify.

But leasing is attractive as it spreads the cost into monthly chunks, and if leasing the van for business purposes, the lease costs can be written off as a business expense.

Magnetic signs are often used on leased vans that need to be returned unpainted.

The configuration of the van is the fun bit.

The harsh reality is that in today’s climate of supply shortages, getting hold of your new van is likely to involve a lengthy wait.

Semiconductor and wiring harness supply problems have taken their toll on the ability of manufacturers to actually make their vehicles. As a consequence, it’s a seller’s market, so discounts can be hard to come by.

The alternative, of course, is to find a used van.

Because of the squeeze on supply of new vans, used van prices have risen in sympathy.

While some newer vans will still be in warranty, most van owners hold on to their asset until such point it starts costing money.

An added complication will be finding a van in the specification that meets your needs – a van of the right size, engine and colour probably won’t be on your doorstep.

Given their commercial nature, used vans are likely to have considerable mileage on the clock. That’s fine at the right price, as long as there is some history of maintenance and care.

Think about your future use – is a high mileage going to end up costing more in repairs than leasing a new van?

Van warranties vary between 3 years/60,000 miles and 10 years/100,000 miles, which is offered by Toyota if their franchised outlets are used for servicing.

Maintenance costs depend on your annual mileage but typically vans cover 30,000 miles or two years between services (whichever comes first).