How to avoid car park bumps and scratches

Car parks help keep vehicles safe and secure so their owners can go and do things like work and shop. Sadly, however, this concentration of hard, moving objects in a very confined space can lead to accidents.

But while you cannot influence the parking skills of other road users, you can take steps to help ensure your own parking does not injure anyone or damage anything.

Below we offer tips on how to minimise the chances of a car park bump or prang, and how car park accident insurance claims work - depending on whether you’re at fault or not. 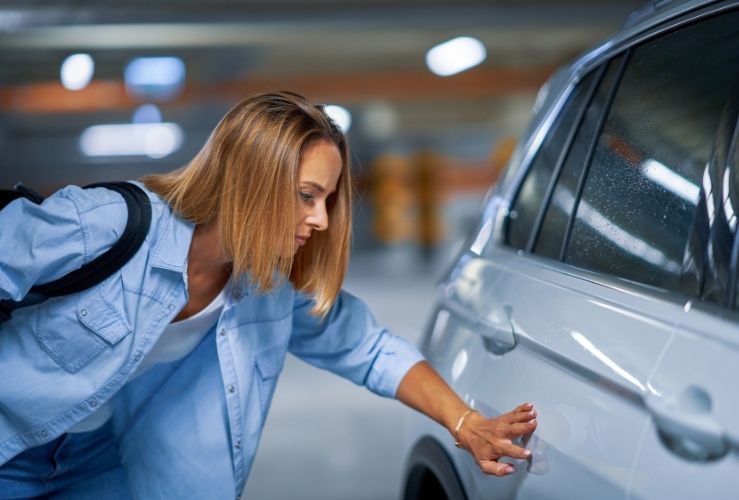 Pay attention in the car park; use your mirrors

Just because you've entered a car park doesn't mean it's time to lower your guard; hazards are all around you.

You may be mentally compiling your shopping list or bobbing along to your favourite song, but it's best to wait until you're safely parked up and out of the vehicle first.

Perhaps the greatest danger in a car park is colliding with a pedestrian - they can be difficult to spot due to the other parked vehicles, structural columns and other obstacles. Then of course you have multiple other vehicles moving around - albeit (hopefully) slowly. Use your wing- and rear-view mirrors to stay aware of all these moving objects. And remember that just as your own view may be obscured, so too might those of other people.

Drive in the car park slowly, no sudden moves

Car parks seem to inspire something rather Darwinian in some drivers, as they tear around looking to grab a parking space.

Of course it’s not pleasant to find oneself outmanoeuvred by quicker or luckier fellow motorists - but driving slowly and cautiously is a much safer tack.

What do you want most: to park up in record time, or eliminate the possibility of hitting a pedestrian or other vehicle? There's a time and place for 'survival of the fittest' - and the Tesco car park is not it!

And of course, always check your blind spot when it's time to leave and you're backing out, while keeping tabs on those mirrors.

One door opens, another closes

You might not expect car parks to be a source of philosophical thought; and you'd be right. But doors do literally open and close in the car park all the time - and you need to ensure you don't damage another vehicle when you open yours.

If you're travelling with children, or passengers who don't ordinarily travel in cars, gently urge them to take care when opening doors.

If deep, scratches caused by doors edges can be costly to repair. Indeed, one survey suggested 32% of damage acquired in car parks was due to door scratches.

More importantly, opening a door without due care could injure a pedestrian. 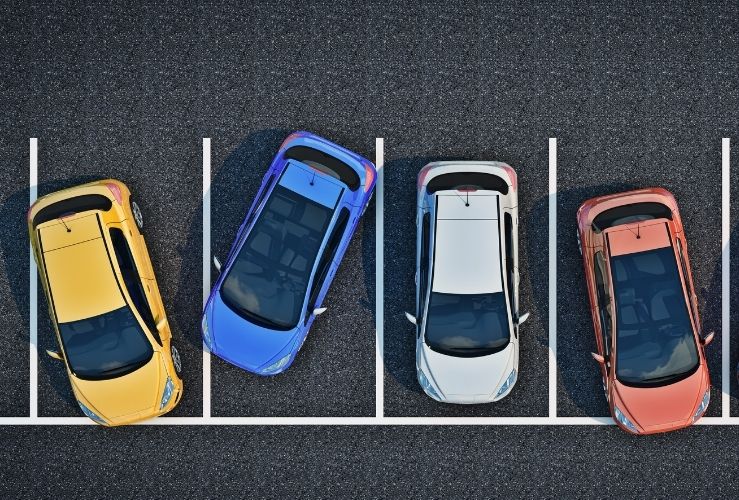 When we say 'park strategically', what we mean is, 'park between the lines'.

If your vehicle is not aligned within the stripes as centrally as possible, it leaves less room for other motorists to park and open their doors. That increases the chances of a prang or scratch.

A little extra time and effort spent on parking will minimise the chances of an incident - and will stop fellow park park users from losing their temper with you!

Without bringing up philosophy again, in the car park it's important to think long-term (or for at least as long as your shopping trip will take).

By reverse parking you'll have the best view when the time comes to leave - eliminating the chances of backing into anyone or anything.

Park away from other vehicles

It's tempting to park as close to your destination as possible, but lots of other drivers will have this very same desire. This can result in a concentration of cars in certain areas - which increases the chances of a prang or door-bash.

Instead, look out for blocks of empty spaces where you can park up without other vehicles next to you, or choose a space at the end of a row.

Fold those wing mirrors when parked

This will reduce the chances of someone knocking them when opening their door.

It will be easier and less stressful when exiting and entering your vehicle if you avoid obstacles like pillars, walls and sign posts.

Think about which vehicle you're parking next to

Parking up beside a vehicle covered in striations and dents may suggest that the owner is not quite as diligent as you.

As a precaution, it might be wise to avoid such vehicles and instead opt for shiny dent-free parking neighbours (although do take care around their faultless paintwork!).

If partially closed these barriers can be difficult to spot, increasing the chances of a collision. There have also been reports of windscreens or side windows being pierced. Take extra care around these barriers.

What happens if you do have an accident in a car park?

Even the most careful driver can have the occasional car park bump or prang. If you're responsible for one, it's critical you do not just leave the scene. Try and find the motorist, and if you can't, leave a message on the damaged vehicle with your contact details.

If you’ve had your car scratched or pranged in a car park, the first step is to assess the damage.

Take photos - you may need them later for insurance purposes. Next, contact the motorist - if they left a note. With luck they will still be nearby. They may offer to pay for the damage then and there. Otherwise, make sure you exchange insurance details. Remain as polite and calm as possible - since we all make mistakes!

You should then contact your insurers. Whether or not you wish to make a claim, you need to do this in order for your policy to remain valid.

As you might expect, car park insurance claims are not uncommon - so your insurer will be able to guide you through the well-trodden process smoothly.

Car park accidents: who's at fault?

When a car backs out of a parking space before colliding with another car, either vehicle may be deemed responsible, depending on the specific circumstances. However, in the UK the vehicle backing out is often deemed responsible; the onus tends to be on them since they are essentially ‘merging into traffic’.

That’s why it's so important to back out slowly and carefully.

Visit your garage and get any damage sorted as soon as possible. Even a small dent can lead to rust, and a more serious problem may not become apparent until your vehicle gets the once-over from a mechanic.

Critically, any damage you sustained may cause you to fail your next MOT - so it’s important to address it sooner rather than later.