Pelican, Puffin, Toucan, Zebra, Equestrian - do you know how these crossings work? Refresh your memory with our complete guide. 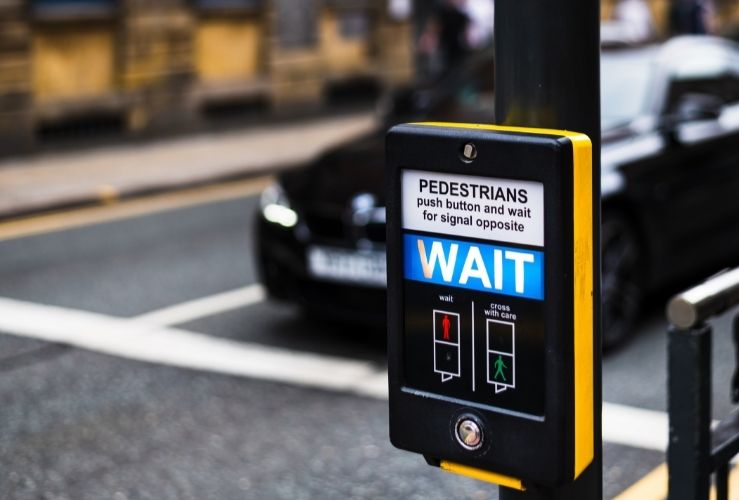 For anyone who has crossed the road in a developing country, the experience can require extra vigilance since controlled pedestrian crossings are less common. Additionally, pedestrian safety is not always a high priority, and driver training may be less rigorous than in some developed nations.

In the UK there has long been a focus on pedestrian safety, with a number of crossings designed to give pedestrians ample time to cross the road. Driver training in the UK also places a strong emphasis on pedestrian safety. The UK has among the lowest traffic related fatality rates in the world, in part due to well-designed pedestrian crossings.

Among European nations, comparing road deaths per million inhabitants, the UK had the fourth lowest figure for traffic-related deaths in 2020.

Here we look at the different crossing types in the UK, and how to use them safely. All UK crossings have been given names that sound similar to either birds or equine animals. 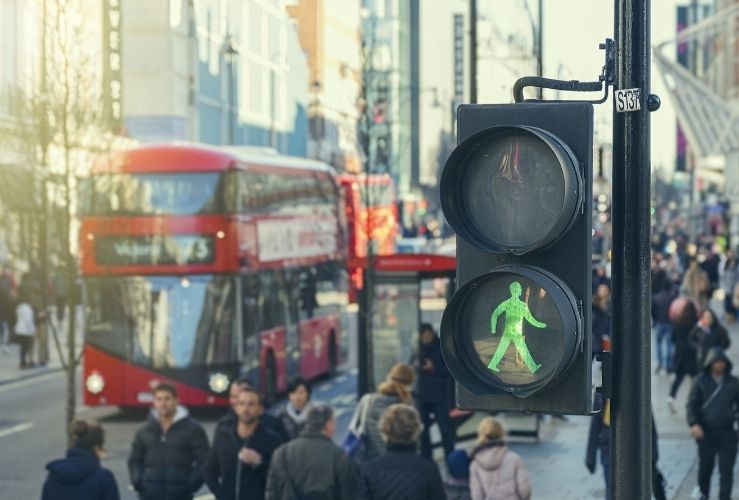 The first of three crossings that appear to take their names from birds, a Pelican crossing is derived from the term "PEdestrian LIght CONtrolled" (based on the first letters).

When you press the button on a Pelican crossing, you'll see a WAIT sign light up on the yellow box. When the green man shows on the other side, it is safe to cross.

A Pelican crossing is timer based, giving the pedestrian 6-7 seconds to cross the road, before the red figure shows again, meaning WAIT.

A Pelican crossing has a flashing amber phase for motorists, telling them to wait for any pedestrians to finish crossing the road. If there are no pedestrians, the driver can proceed.

As we shall see, the Pelican crossing is a simple timer-based crossing, unlike the Puffin crossing which has additional sensors (see below).

The Puffin crossing takes its name from the first letters of "Pedestrian User Friendly INterface".

The Puffin crossing works like a Pelican crossing, but has additional sensors for the traffic and the pedestrian waiting area. For example, a person may press the button to cross the road. The sensors may detect that a vehicle is approaching, and wait for it to pass before showing the green "safe to cross" figure. This is to prevent the driver being startled, reducing the chances of a collision. Conversely, if there are no approaching vehicles the lights may change to the “safe to cross” state immediately.

This is more efficient than a Pelican crossing, which simply makes a pedestrian wait 6-7 seconds before displaying the “safe to cross” green figure.

A Puffin crossing's sensors can also detect how many people are waiting to cross. If it detects a larger group of people, it will allow more time for crossing the road.

Some Puffin crossings also have a feature for visually-impaired users. A "secret" cone lies under the crossing box. When the cone begins to turn, it is safe to cross (green man). When it stops, the red man is showing and the user must wait.

On Puffin crossings, a red or green man is shown on the box on the same side as the user (unlike a Pelican crossing which displays it on the other side of the road). 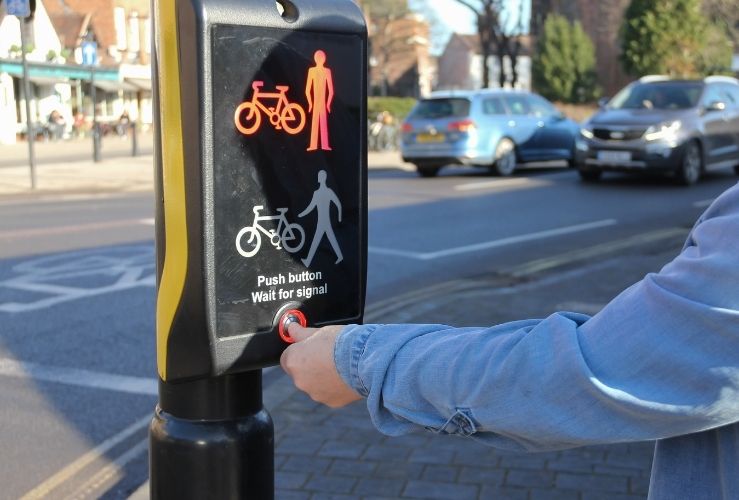 A Toucan crossing also appears to have an ornithological root, but is in fact based on "two can cross” - i.e. both pedestrians and cyclists can use it.

A Toucan crossing features a box with two sets of pedestrian and cycle icons. The red set of icons light up to tell users to wait, while the green icons tell the user to cross the road. There is often also a bicycle lane marked out approaching the crossing.

Like the Puffin, the Toucan crossing also has sensors to detect traffic and pedestrians/cyclists. 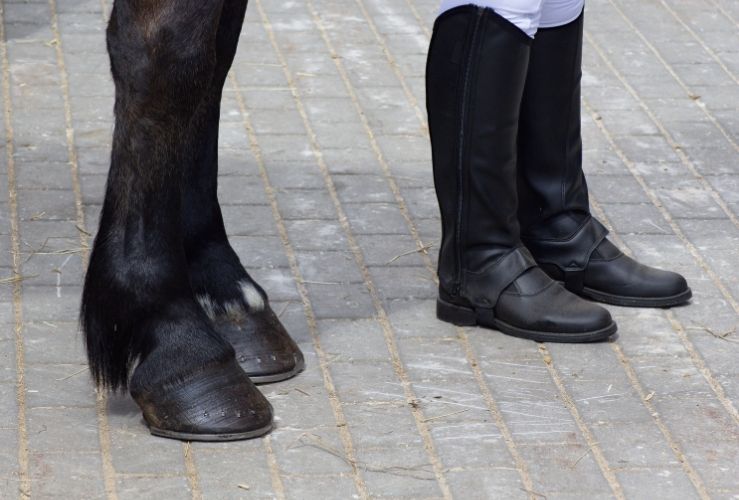 This less common crossing is for riders on horseback and is one of two crossings with equine-related names. “

Equestrian” means “related to horses”, while "Pegasus” was a mythical flying horse.

The yellow box features two icons of a mounted horse - one for green and one for red.

These crossings often feature two boxes - one at pedestrian level (for pedestrians) and one at horse-rider level (for the horse rider).

The Equestrian crossing also has sensors to detect traffic and mounted horses. 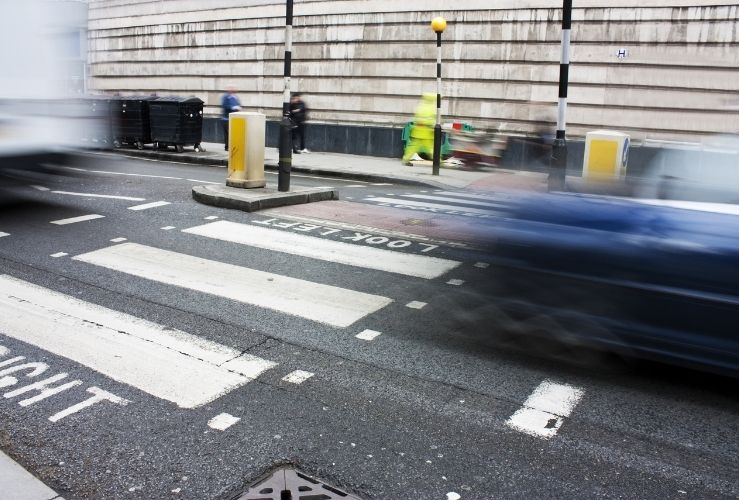 Zebra crossings are so-called due to having black and white stripes across the road (like a zebra). Poles on either side of the road are also striped, and feature constantly flashing orange-yellow orbs called "belisha beacons".

Drivers must give way to anyone crossing a zebra crossing, and anyone looking to cross.

Zig zag white lines are marked on the approach to every zebra crossing. This means no vehicle may park in this area, since the vehicle may obstruct the view of the crossing, and potentially lead to a collision with a pedestrian.

Additionally, zig zags mean drivers cannot overtake the leading vehicle in this zone, because they would also not have a clear view of the crossing.

If someone has parked on the zigzag line, you must approach the crossing with extreme caution.

Parking or overtaking at a zebra crossing could result in a point on your licence and a fine.

There are no traffic lights at a zebra crossing.