Smoking and driving: Is it illegal?

Is it illegal to smoke and drive?

Smoking has long been known to cause serious health problems, but can you smoke while driving your own car - legally?

The short answer is yes, it is legal to smoke in your own vehicle - but if doing so distracts you from the road or leads to an accident, you could still find yourself on the wrong side of the law. 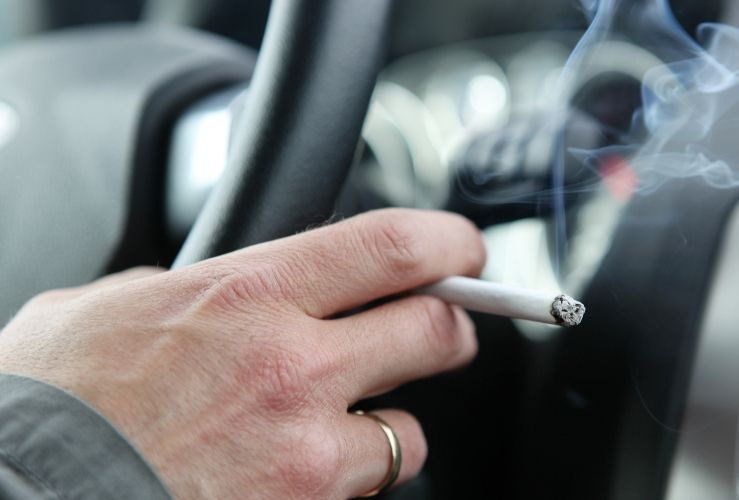 According to ONS data, around 14.1% of UK adults smoke - equating to about 6.9 million people.

Considering that 74% of the population has a driving licence, understanding how the law approaches smoking in cars is relevant to more than five million people.

Research suggests smoking in an enclosed vehicle pollutes the environment with nicotine and other chemicals, while smoking in a vehicle affects other occupants with second hand smoke, even the residue left behind after smoking can affect the health of passengers - especially children.

While legally you can smoke and drive, second-hand smoke releases 50 known human carcinogens into the atmosphere, which can cause disease and premature death in children and adults. According to research, there is no safe level of second-hand smoke.

Smoking in a car can leave “residual second-hand smoke” in a car’s microenvironment - known as third-hand smoking. 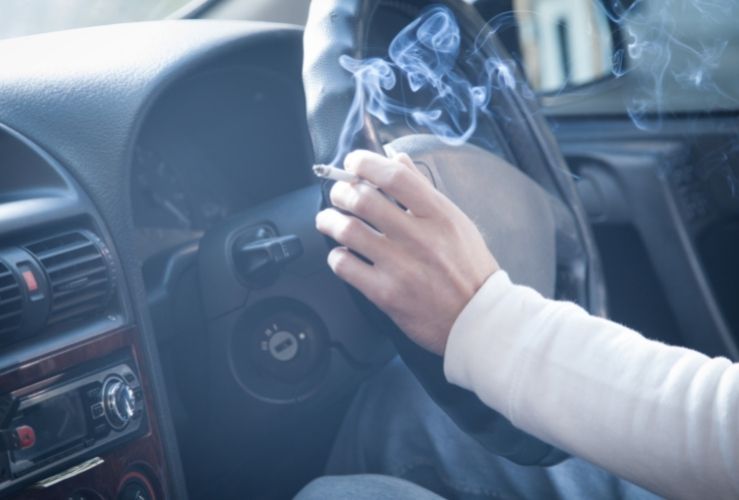 But if carrying out these activities impedes your ability to drive and contributes to an accident, you may be prosecuted for careless driving or not being in proper control of a vehicle. You must always have full control and have a clear view of the road.

The Highway Code's Rule 148 lists a number of activities that should be avoided if driving or riding a motorcycle.

Can you smoke while driving with under-18s in your car?

As a driver, you must not allow smoking to take place if anyone aged under 18 is inside the cabin.

In England and Wales, the relevant legislation includes motor caravans.

In Scotland, smoking is not allowed in a private motor vehicle in a public space with occupants aged under 18, unless the vehicle is parked and being used as accommodation.

What about smoking in convertibles?

It is not illegal to smoke with under-18s in a convertible if the roof is completely down.

Can you smoke and drive with the sunroof open?

You are not allowed to smoke in a private vehicle with under-18s inside even if the sunroof is open.

The same is true if you smoke in an open doorway of such a vehicle, or with the air conditioner on.

What's the penalty for failing to prevent someone from smoking in a vehicle with under-18s inside?

You could be handed a £50 fixed penalty notice if you fail to prevent smoking in a smoke-free private vehicle. The fine is reduced to £30 if paid within 15 days of issue. If prosecuted by court the maximum fine is £200. 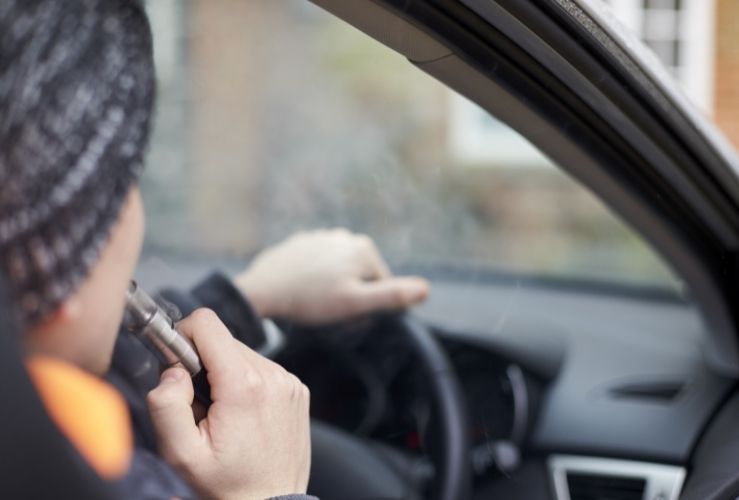 What about vaping in your private vehicle?

There are no laws against vaping in a private vehicle. However, as mentioned, you must be in control of the vehicle and have a clear view ahead - so vaping while driving may not be wise.

Since vaping is a relatively new phenomenon, some argue long-term health risks are yet to be understood.

Second hand vape aerosol can expose others to the same levels of nicotine as second hand smoke does. Vape aerosol can contain lead, formaldehyde and toluene. However, at present there is no law against vaping while driving, or vaping with under-18s in your vehicle.

Is it illegal to smoke and drive in company vehicles?

In England, smoking is not allowed in company vehicles if they're used to transport the public, or are used for paid or voluntary work by more than one person (the law applies whether or not those individuals are in the vehicle at the same time).

Legislation in Scotland, Wales and Northern Ireland does not allow smoking in work vehicles such as vans, although there is no law against smoking in cars used for work.

The international no smoking sign (minimum 70mm diameter) must be displayed in each compartment where people are carried.

Your company may have additional rules as regards smoking in work vehicles. 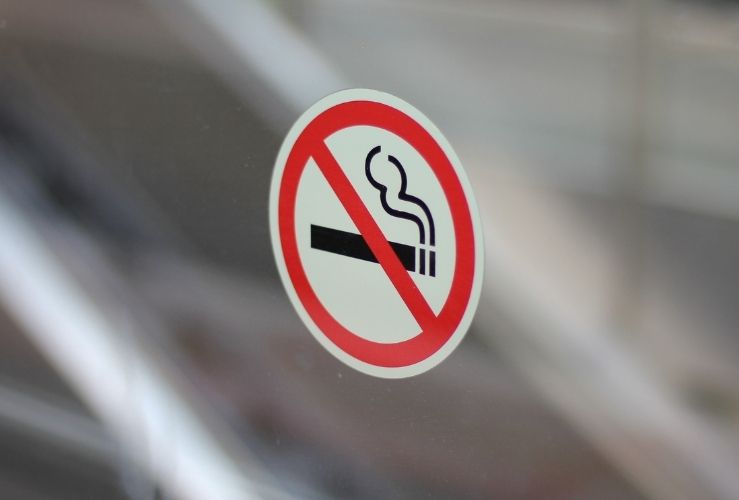 What's the penalty for smoking in a smoke-free work vehicle?

The same £50 penalty applies if you're caught smoking in a vehicle classed as a ‘no smoking area’.

It might also land you in hot water with your employer.

What about smoking in public transport vehicles?

Companies that operate buses, coaches, trains and planes all place clearly visible no smoking (nor vaping) signs inside their cabins and compartments. This is not merley company policy - the law states it is illegal to smoke in any type of public transport.

Besides this, the UK Government banned all smoking in enclosed public places in 2007.

Is smoking bad for your car?

Whether you smoke and drive, or light up while parked, tobacco smoke isn’t just bad for you and your passengers - it could hit your vehicle’s resale value, too.

Research by University of California, San Diego, and San Diego State University, shed light on the impact of smoking on a car's interior. The study found that despite cleaning regimens, nicotine and other chemicals remained in upholstery, dashboard and on dust in the air.

Smokers' cars also had more ash and burn marks in their interior.

It’s no surprise that a used car previously owned by a smoker may fetch less than one that has been smoke-free.

According to research by the National Centre for Biotechnology Information (NCBI), on average, the value of a car decreases by 7.7% if it has been smoked in, compared to a smoke-free vehicle.

It’s clear that in-car smoking comes with a host of drawbacks,

Including first-, second- and third-hand smoke, harm to your vehicle’s resale value, and of course, potential fines or prosecution if you’re found to have broken the law.