Whether you've just passed your test or you've been driving for years, it's always a good idea to brush up on your Highway Code road sign knowledge.

It all comes down to safety: by knowing UK road signs you're helping to keep yourself, your passengers and other road users safe.

Blue ones tell you to do something; red ones give you orders or let you know about restrictions.

These are almost invariably bordered in red and are warnings (layouts, hazards etc.).

These signs provide information or directions on the road: blue for motorways; green for primary (A) roads; and white for minor (B) roads.

There are many variants of Highway Code road signs - Let's take a look at some of the most common UK sign posts... 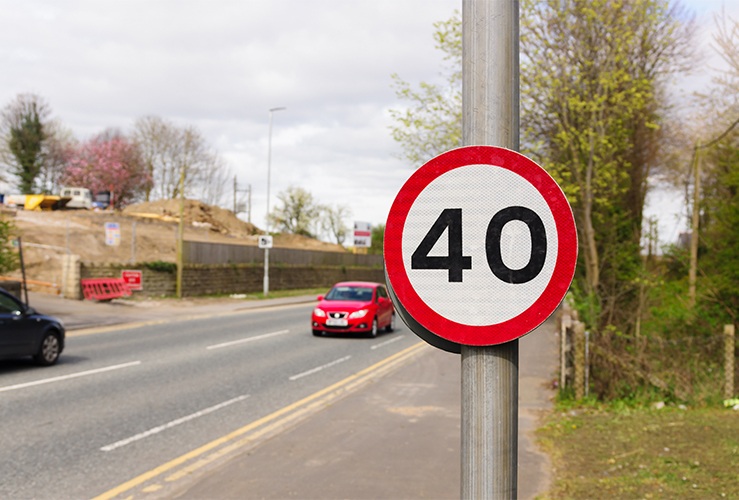 A specific speed limit sign: a circular sign with a red border and a number denoting the speed limit.

You may see these as you enter certain built-up areas with the word 'ZONE' below it.

When you leave that speed limit area, you'll see the same limit sign with a stroke through it and ‘ZONE ENDS' beneath. 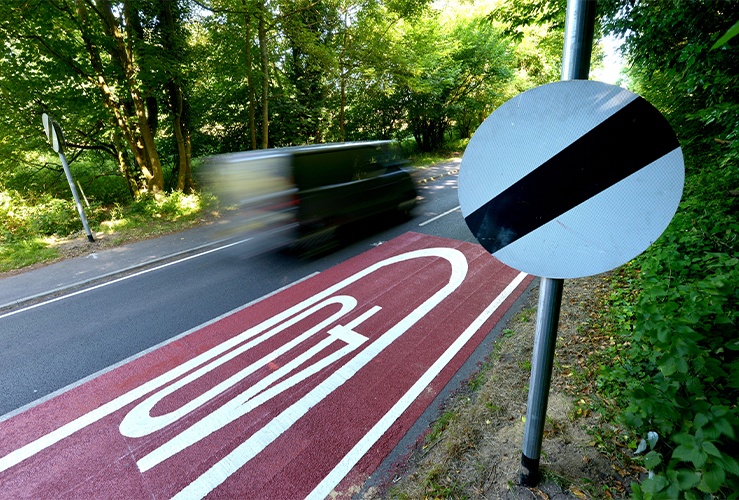 This is a white disc with a black diagonal stroke.

Note: apply common sense at all times; it may not always be appropriate to travel at the maximum speed. 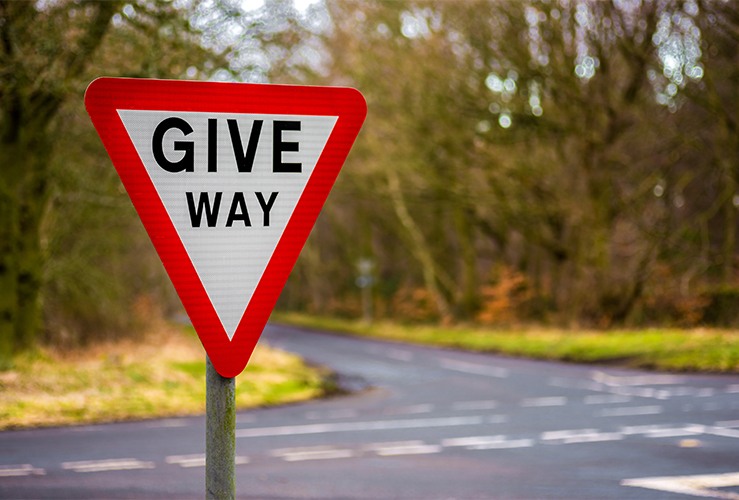 The full meaning is: ‘Give way to traffic on major road’.

It's a common sign on British roads and means the traffic on the road you're joining has priority; you must wait for a suitable gap before merging.

It usually contains the words 'GIVE WAY', but sometimes features the distance in yards to an upcoming junction.

Often accompanied by a speed limit sign, the GIVE WAY sign is upturned so snow is less likely to accumulate on and obscure it. 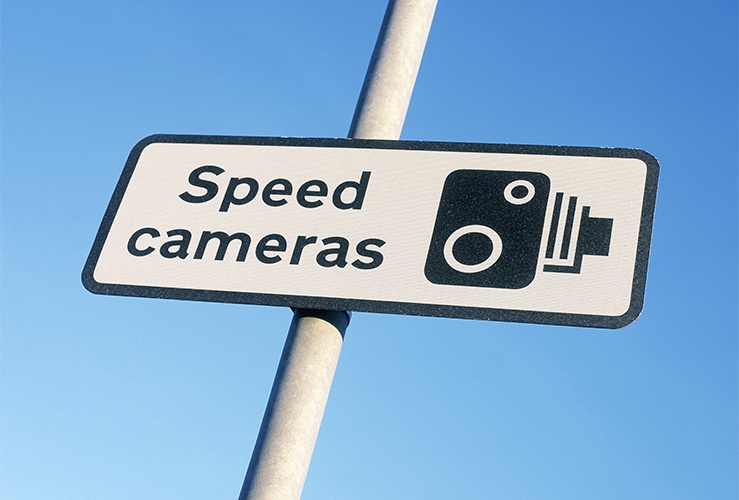 The sight of this sign may quicken the pulse: it of course means a speed camera is nearby, enforcing local traffic regulations.

It's an old-fashioned camera icon on a white rectangle with a black border.

The no stopping sign is a blue disc with a red border and red cross.

It means you cannot stop for any reason, including dropping off or picking up passengers.

Under some no stopping signs you'll see a time period denoting when the rule is in effect.

No waiting road signs are often yellow rectangles with a time period (eg. Mon - Sun, 8 am - 6.30pm), and a blue disc with a red border and a single stroke through it.

Not to be confused with the full red cross of the 'no stopping' sign, it means you can pick up or drop off passengers, but you cannot not stop any longer than necessary. 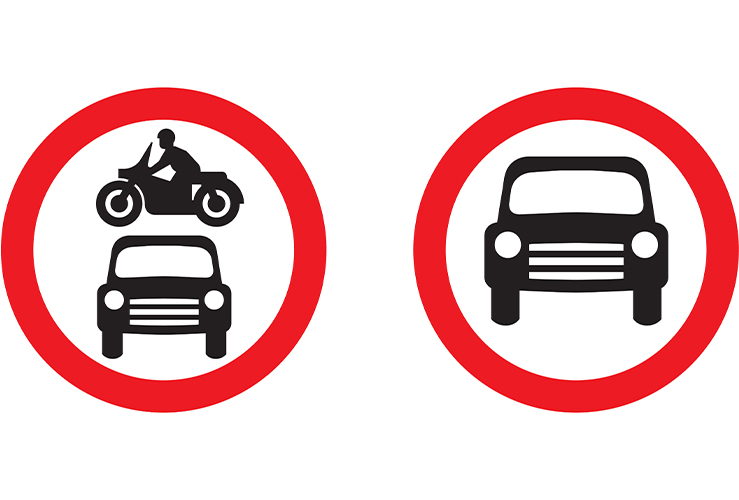 The no motor vehicles sign consists of a white disc with a red border and icons of a car and a motorbike.

It means cars and motorbikes are NOT permitted on a particular road.

Since it does not have the classic red stroke through it, some people get confused and think that the car and motorbike sign means the opposite - that cars and motorbikes are the only vehicles allowed.

These 'no motor vehicles allowed' signs are often seen where pedestrians and cyclists have right of way.

This is a T-shape in a red-bordered triangle with a white background.

It is seen when a B road joins an A road. 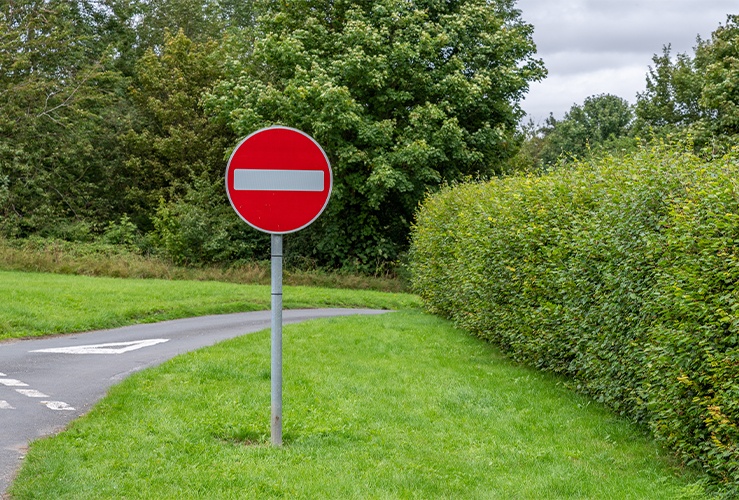 A red disc with a horizontal white dash across the middle. It means cars, motorbikes, buses and cycles are not allowed. 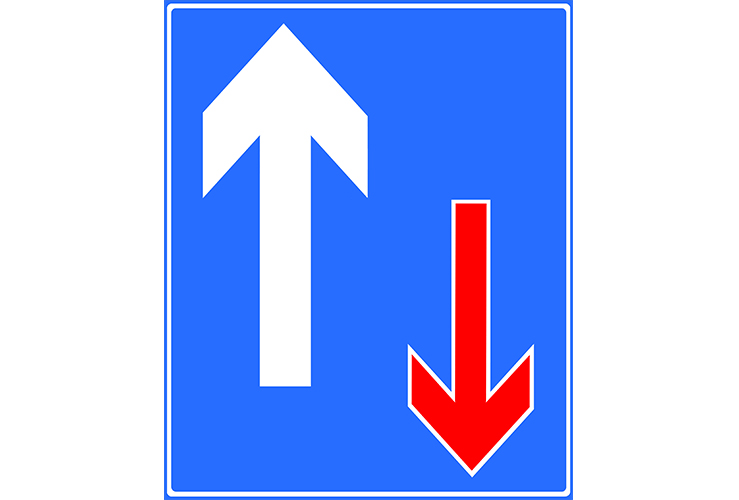 A blue rectangle with a larger white arrow going up, and smaller red arrow pointing down.

It means you have priority over oncoming traffic. It often appears when a road gets narrower. 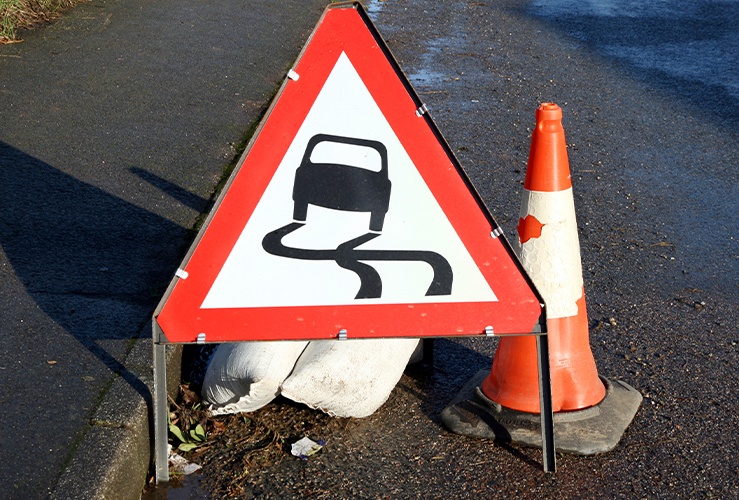 The slippery road sign is a red-bordered triangle with a black car that has lost control (denoted by skid marks).

Authorities tend to use this sign sparingly, so when you see it, you should take notice and reduce your speed.

They are usually accompanied by signs stating how far the slippery road continues.

A red-bordered triangle with a gradient icon and a percentage figure - eg 25% (the higher the number, the steeper the hill).

It means you're either about to go up or down hill.

A white disc with a red border and two cars - one black, one red.

It means no overtaking and often appears where visibility is poor, or where there are hidden driveways that make overtaking very dangerous.

This is a red-bordered triangle with three cars queuing, above a rectangle with the words “Queues likely".

Reduce your speed to minimise the chances of a front-on or rear-ward collision. 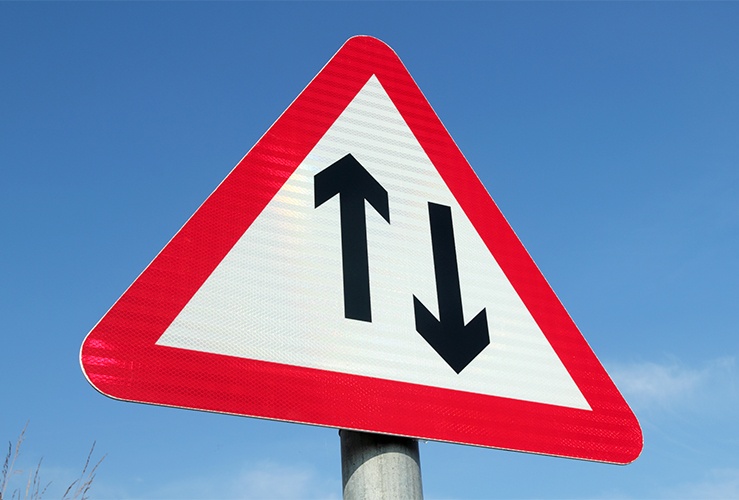 A red-bordered triangle on white with two horizontal black arrows of the same size, moving in opposite directions. It means you're leaving a one-way road and about to join a two-way road. 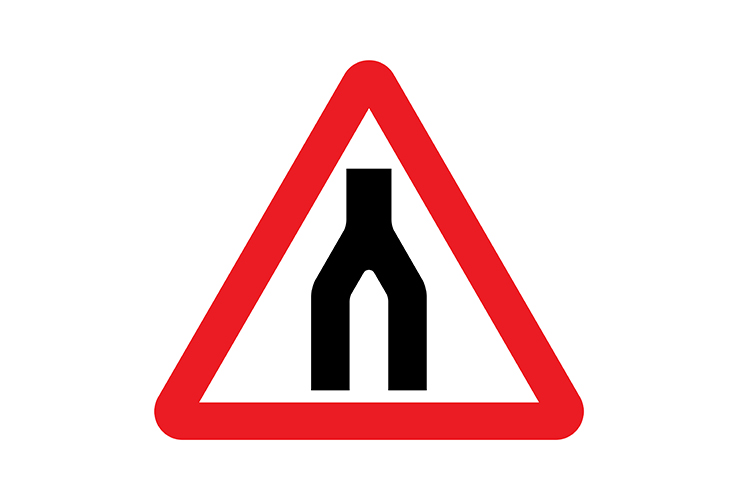 A red-bordered triangle with two black lines merging together - meaning you're about to join a single carriageway road. 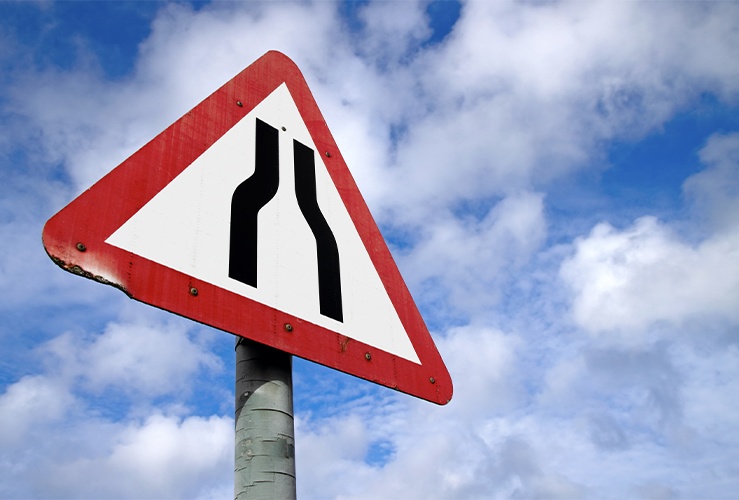 Another red-bordered triangle on white with two black lines moving closer together - denoting that the road is getting narrower.

When you come across a road narrows sign, reduce speed and take extra care, since there will be less space to pass other vehicles

A red-bordered triangle on white featuring an adult and a child.

It means pedestrians are using the area ahead. 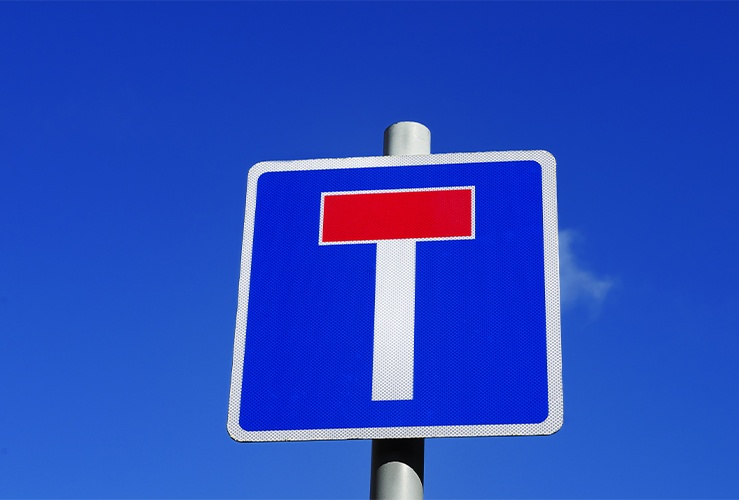 A blue square with a white vertical below a red horizontal, forming a ‘T’.

It means the road is a dead end, and that unless you're heading to a destination on that road, you should not continue. 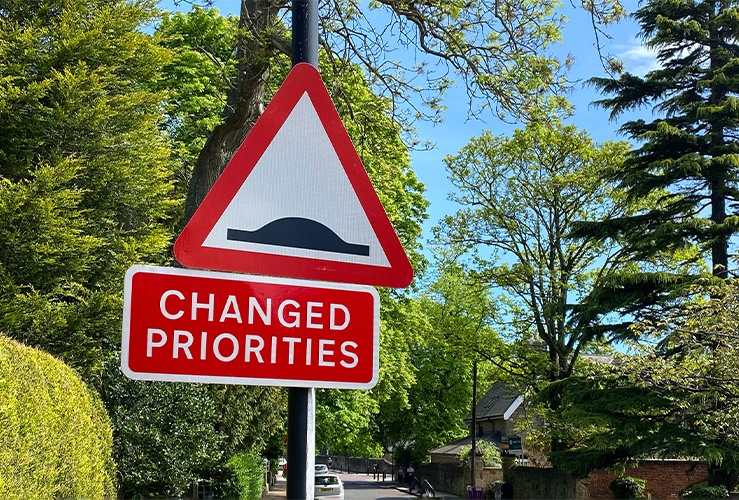 A red-bordered triangle on white featuring a black hump. It means there could be one or more humps ahead.

It should be accompanied by another sign showing how long the humps continue.

Where road hump signs are located, maintain a low, steady speed so as not to damage your suspension or brakes on the humps. 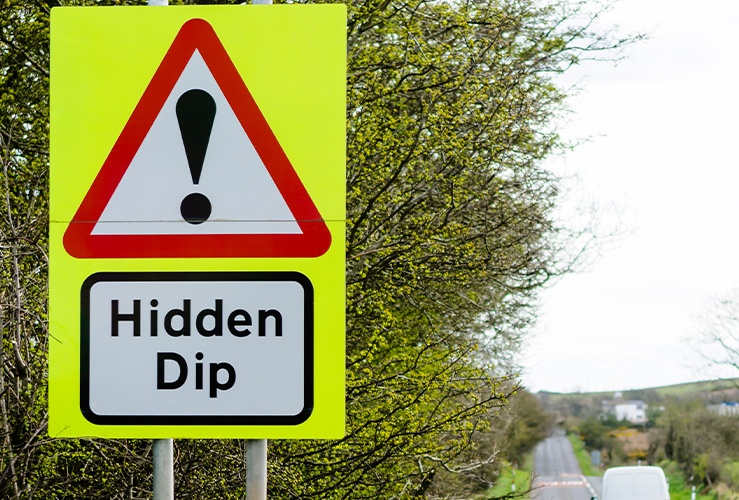 ‘Other danger’ signs feature an exclamation mark in a triangular sign, and will describe the hazard on a white sign below.

The above exclamation mark road sign traffic sign means a hidden dip, but similar road signs are used to indicate that an other hazard lies ahead. 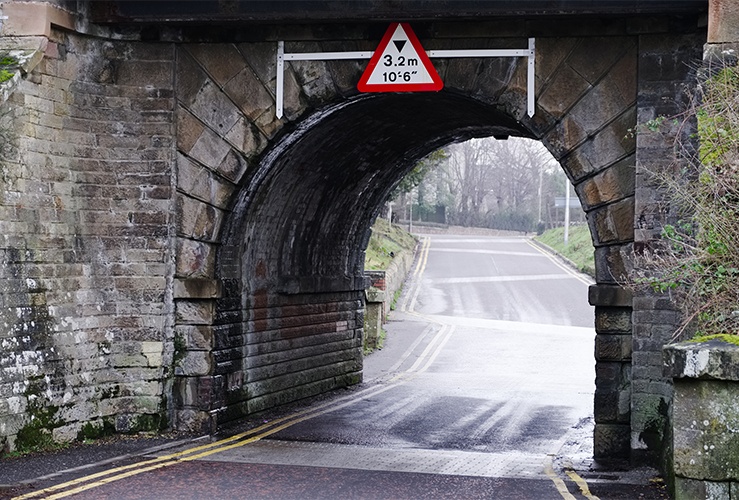 (Usually) two red warning triangles with a maximum height (one in feet, one in metres).

If your vehicle is over the stated height, you cannot proceed down a given road, since you'll strike a bridge or other hazard. A similar sign exists for vehicles over a certain width.

You may also see these signs in red circles.