Speed cameras in the UK: A complete guide

Among motorists, speed cameras have long been a contentious issue. But whether you support them or not, there's no denying they are here to stay.

Speed cameras are installed nationwide with a single objective: to discourage speeding and save lives. They are often installed in areas where high numbers of accidents take place.

A London School of Economics study showed that from 1992 to 2016, speed cameras reduced UK road traffic accidents by between 17% to 39% - making them a critical tool in improving road safety.

The Royal Society for the Prevention of Accidents - RoSPA - argues that driving at high speeds makes it more difficult to react to quickly changing situations on the road. The society also states a crash at higher speeds “will be more severe, causing greater injury to the occupants

and any pedestrian or rider hit by the vehicle.”

The penalty for speeding is a minimum fine of £100 and 3 penalty points added to your licence. Those who accumulate 12 penalty points over 3 years could face disqualification.

The first speed camera in the UK was a ‘Gatso’ - installed on Twickenham Bridge in 1992. Manufactured by Dutch firm Gatsometer BV, Gatsos are now common across the UK.

Since the year 2000, local authorities have been allowed to keep a proportion of funds raised by speed cameras, to be spent on other projects in the area. This has resulted in partnerships between local authorities and police, set up with government funding. However, state funding for these schemes was cut in 2007 and again in 2010, which led to some authorities switching off their speed cameras.

Many UK drivers believe driving 10% + 2 above the speed limit is safe. However, exactly how speed cameras are calibrated is not in the public domain. Anyone caught driving even 1mph above the limit is breaking the law and could face a penalty. That said, the National Police Chiefs’ Council (NPCC) suggests police officers enforce the limit plus 10% + 2. However, this is merely a recommendation. It is entirely up to the discretion of the involved police officer if this additional margin is used.

With this in mind, the wisest approach is to stay within the speed limit - preventing the possibility of a fine, and keeping you and other road users as safe as possible.

At what distance can a speeding vehicle be caught at?

Some modern speed cameras can detect a speeding vehicle at up to a mile away. However, most cameras use road markings to work out the distance over time to determine a vehicles' speed.

So-called 'long rangers' are cameras that can catch a speeding vehicle up to one kilometre away. What's more, they capture images and videos too, making it near impossible to dispute a speeding fine. A successful 2018 trial by Gloucester police led to UK-wide adoption of the 'long ranger' speed camera.

While the Gatso speed camera is the most common in the UK, an alternative called Truvelo is also used. Unlike the Gatso, the Truvelo takes photographs of the person at the wheel - again making speeding fines virtually impossible to dispute.

As the name suggests, mobile speed cameras can be placed next to any road - in either marked or unmarked police vehicles, or in the form of hand-held devices. Mobile units may be used as speed safety campaigns or as part of safety camera partnerships.

Mobile speed cameras can catch speeding motorists while they themselves are on the move, although these cameras are mostly used while stationary. 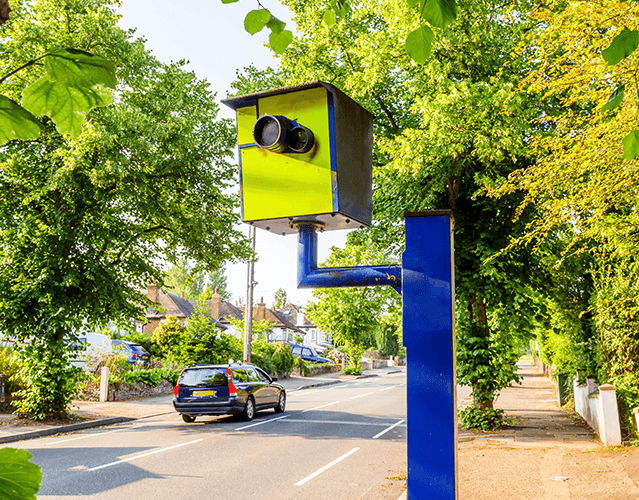 Introduced in 1999, SPECS cameras use Automatic Number Plate Reading (ANPR) technology to take a date and time stamp as a vehicle passes between two cameras. The computer can then calculate the average speed. SPECS cameras are increasingly common on UK roads, with at least 263 miles of road covered by them.

Similar to average speed cameras, variable speed cameras do not tend to operate 24 hours a day. These cameras are mounted on overhead motorway gantries which display the speed limit. They are often used on smart motorways, where the speed limit can be lowered in response to bad weather or in order to reduce congestion.

As the name suggests, these cameras detect if a vehicle runs a red light. Most traffic signal cameras are made by Gatsometer, with the Gatso RLC 36 model able to detect both speeding and traffic light violations.

It is not illegal to use a speed camera detector in the UK, but in mainland European countries - notably France - their use is strictly prohibited. These detectors harness GPS systems together with databases of known camera locations.

These systems prevent speed cameras from working properly. They are illegal in the UK and most other counties. Very large fines can result from using them. In early 2019, a driver from Dewsbury was jailed for three months for using a speed camera jammer.