Tyre speed ratings tell you how fast a tyre can be driven without impacting safety.

Every tyre has been tested by engineers so you can be sure that the speed rating stamped on the sidewall is accurate.

Providing the vehicle is not overloaded, it is safe to travel at the speed shown.

What if I go over the speed rating shown of my tyre?

It's not recommended that you exceed the speed rating limit, but it’s likely there is a margin beyond this.

Apart from dealing with accidentally going too fast, this margin is also to ensure tyre performance is not worse than that of the vehicle.

If the tyre speed rating is too low for your vehicle, you may lose control or suffer poorer performance due to the rubber overheating. In extreme cases you may even suffer a blow out, which could cause injury or even death to you, your passengers, or other road users.

A tyre blow-out is when a tyre loses pressure very quickly and is destroyed. Aside from making it difficult to drive - particularly at high speeds, a blow-out could damage the wheel, suspension and other components.

While maintaining safety at speed is critical, having the right tyre rating on your tyres will help improve ride comfort, traction and cornering ability, while reducing tread wear.

The right speed rating for the vehicle and conditions

Tyres with a higher speed rating are likely to offer longer stopping distances and better grip, but they may be less effective in lower temperatures and may suffer increased wear.

Tyres rated V, Z, W and Y are generally better for high performance vehicles in warmer climates. Others are better for colder climates and lower speeds.

If you fit tyres with a speed rating lower than the manufacturer recommends, your insurer may not pay out in the event of  a claim. 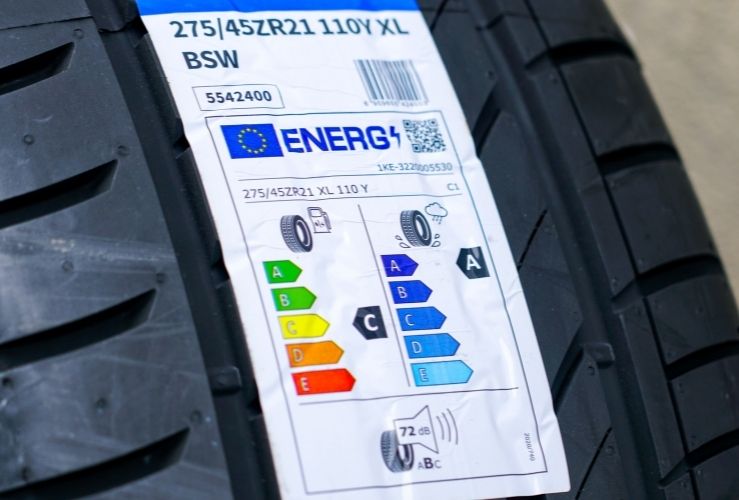 How to read a tyre speed rating

Your tyre's speed rating will be stamped on the tyre's sidewall. It usually comes at the end, after the load rating.

After the speed rating there may be other numbers or letters, such as XL to denote extra large.

Speed rating from A (lowest) to Y (highest). Most regular cars will require tyres with speed ratings of Q, R, S, T, U, or H, covering speeds from 99 to 130mph.

How the speed rating is worked out

Every tyre is tested in laboratory conditions to ensure it handles the intended top speed with a simulated maximum load.

Labs test tyres in 6.2mph steps, in increments of 10 minutes.

Can I use tyres with a lower speed rating?

It is not recommended to use tyres of a lower speed rating than is required for your vehicle. It is not illegal, but as mentioned it could affect both safety and the validity of your insurance.

By choosing tyres with a lower speed rating than is recommended, the top speed is also reduced.

Be aware that fitting tyres with a speed rating lower than recommended by your manufacturer could invalidate any warranty you have. Check your car manual for details.

When buying a used car, it's a good idea to check they are fitted with the correct tyres, or you could be storing up problems for later on.

Can tyre speed ratings be mixed?

Mixing tyre speed ratings is not recommended. If a driver decided to do this, the tyres with the lower speed ratings should be fitted to the front axle in order to avoid possible oversteer. You should never drive faster than the lowest rated tyres on the vehicle.

Ideally you should have tyres with the right speed (and load) rating on all wheels.

It's also important to understand your vehicle's tyre load rating. This is also on the tyre's sidewall, and comes before the speed rating.

If this load is exceeded you may suffer poor handling and even risk a blow-out. Below is the tyre load rating index.

If you are unsure about which tyres to fit on your vehicle, your local tyre outlet or garage may be able to advise. But all the information you require should be detailed in your vehicle’s handbook or elsewhere on the car.

It's also important your tyres are inflated to the recommended pressure so they function at the highest speed they have been designed for.

Underinflated tyres can cause bulging and make the vehicle bounce up and down, which can increase friction and heat - and therefore the chances of a blow-out.

The size specifications on your tyres will be listed in the same group of letters and numbers as the speed rating, but it comes first.

In the example listed above, 205/55 R16 91W, the first two sets of numbers identify the tyre section width, and the aspect ratio. The next element, R16, denotes the construction type (R means radial in this example) and the diameter of the wheel rim (16), normally measured in inches.